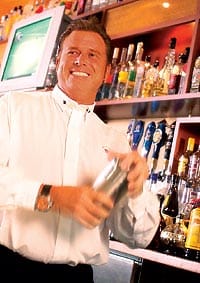 Want potatoes without the carbs? Try Chopin vodka from Poland, made with the Slobovia potato. According to atkins.com, pure spirits such as vodka contain zero carbs. Pasta lover? There’s Mezzaluna vodka from Italy made with semolina grain. Or if you’re looking to introduce soy into your diet and can’t warm up to tofu, try 3 Vodka, endorsed by the American Vegetarian Association.

These represent only a few of more than 100 “designer” vodkas served at Pacifica Seafood Restaurant’s vodka bar. The whole lot hails from more than 20 countries and includes vodkas made from a wide variety of grains, fruits, and herbs — even 100 percent Belgian chocolate. They could become the next popular food group.

Vodka already is popular, accounting for more sales than all other alcohol (except beer and wine) combined in the restaurant/bar business, says Pacifica Managing Partner Mitch Epstein. The Palm Desert restaurant capitalizes by offering three-ounce pours of any vodka for $5.

“The idea is to make it fun and give people an opportunity to experience all the different types of vodka from around the world,” Epstein says. He modeled the bar after Red Square at Las Vegas’ posh Mandalay Bay — and elevated the concept.

Epstein encourages guests to venture beyond their standard brand, even offering to “buy them” their drink if they don’t like the vodka he recommends.

He may recommend Boru from Ireland (filtered through 10 feet of charcoal from Atlantic Irish Oak), Ciroc from France (made with snap-frost grapes), Thors Hammer from Sweden (made with water from a subterranean lake originating from the Ice Age), The Tall Blond from Estonia (no explanation necessary), or the Jewel of Russia (in individually hand-painted bottles).

Part of the fun lies on the shelves lined with bottles like haute couture accessories. Jazz from Poland comes in a bottle shaped like a trumpet. Liquid Ice from Idaho comes in a bottle that looks like, yep, ice. Poland’s Ultimat (which typically sells for $15 to $18 a glass at other establishments) comes in a blue crystal bottle.

The hardest-to-find vodka is Russia’s Youri Dolgoruki and the most popular is Crater One from Bend, Ore., distilled 10 times and filtered through charcoal and crushed lava. Pacifica also keeps two large, tapped jars filled with vodka and fruit (apple, melon, etc.) that, after 24 hours, yield infused vodkas.

Even the glasses are playful. Epstein first ordered martini glasses with offset handles. This summer, he added “the fishbowl” — a cone that nestles in a round bowl filled with ice water.

Best of all, you need not learn another language, as you do with wine tasting. And there’s no set protocol — aside from cent-uries-old Slavic tradition, which calls it an offense to drink before somebody makes a toast. However, should you wish to exercise a little decorum, raise your glass and say, “Na zdorovje! Skål! À votre santé!”