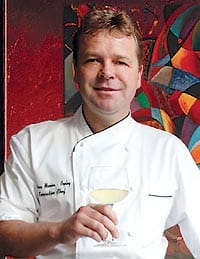 Andrew Manion-Copley, the globetrotting British chef who fell in love with the daughter of Palm Springs residents and then the desert itself, has made an immediate impression in his short time as corporate chef for the Kaiser Restaurant Group, the company behind Kaiser Grille and The Chop House in Palm Springs and Palm Desert, The Deck in Palm Springs, and Hog’s Breath Inn, which opens this fall in La Quinta.

Among Manion-Copley’s first desert adventures were culinary competitions supporting two charitable organizations. In February, he won the top prize in the entrée category at the Date Chef Competition at the Renaissance Esmerelda Resort and Spa and the Most Creative award at Les Dames d’ Escoffier’s L’Affaire Chocolat at Miramonte Resort.

“Andrew is a wonderful and exciting addition to our staff,” says Lee Morcus, co-owner of Kaiser Restaurant Group with his father, Kaiser Morcus. “His extraordinary credentials will translate to enhanced dining experiences for our guests.”

Manion-Copley earned his degree at one of London’s premier culinary academies, Westminster Culinary College. He then took his talent around the world, gaining vast knowledge, perspective, and experience — including time at two prestigious London hotels (the Savoy and the Park Lane) and on the luxurious ocean liner Queen Elizabeth II. He then went to the Grand Hyatt on the Sunshine Coast in Australia and helped it win the Petrees Award for No. 1 restaurant for three consecutive years.

Then Hawaii called. Manion-Copley island-hopped from The Ritz-Carlton Maui to The Lodge at Koele on Lanai, with a detour in between to The Ritz-Carlton San Francisco, at the invitation of renowned chef Peter Dubray. During his stay, the hotel garnered several awards. Back in Hawaii, Copley received awards for the No. 1 restaurant in Hawaii (three consecutive years) and No. 3 resort restaurant in the world.

Recognized by Food & Wine and Gourmet, this charismatic chef has only begun to win over a loyal desert following.