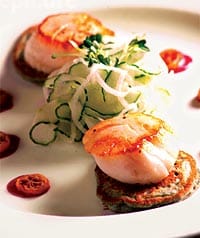 There’s something comforting in the rigid grace of Clint Eastwood — something reassuring about his posture, his deep-set eyes, the way he says in a movie that he’s going to make someone pay. He’s tough, but fair, which makes him the quintessential American hero. And when you’re sitting beneath his scowl inside The Hog’s Breath Inn, the restaurant he founded in Carmel that is now under the steady hand of the Kaiser Restaurant Group both in its original location and now in Old Town La Quinta, you get the general impression that he guarantees you’ll like the food … or else.

Hog’s Breath Inn features American cuisine heavy on tradition — pork chops, prime rib, barbecue spare ribs, and a variety of fish dishes — and light on itself (the pork chops are called Two Chops for Sister Sarah, the prime rib is the High Plains Drifter, and one delicious fresh fish trio is fittingly titled Make My Day). The restaurant isn’t a culinary wonder so much as it is a warm reminder that some of our best meals are inherently simple: a strong steak, a hearty martini, a warm fire. Mix in a hint of Hollywood and what more could a person really want?

“Mr. Eastwood is a great lure, but for us to be successful in La Quinta, we have to provide great food and outstanding service,” Morcus says. “The original Hog has such tradition and history because people know that every time they walk in, they’re going to be satisfied on both levels.”

Located on the second floor at Old Town La Quinta, Hog’s Breath offers seating inside and out and has a well-fashioned piano bar offering nightly entertainment amid a boisterous after-work crowd. The restaurant itself is classic Western Americana: Deep amber-colored woodwork, Mexican tiles, and large fireplaces create the sense that you have come off the trail and need a sizzling steak and a glass of whiskey before you make the rest of your trek.

In truth, though, the restaurant is less rough and more tumble, attractive for families and couples. It offers a surprising array of light dishes as well as the heavy meats — especially the Peppered Salmon Caeser Salad, Monterey Sand Dabs, and Humongous Fungus, an impossibly large portabello mushroom appetizer stuffed with onions, garlic, blue cheese, and roasted leeks. It’s the kind of food that’s always been here, wherever your own “here” might be.

Though Old Town La Quinta is still a work in progress, Hog’s Breath Inn has gone a long way toward creating a distinctive anchor for the district, and it costs less than a fistful of dollars to find out why.