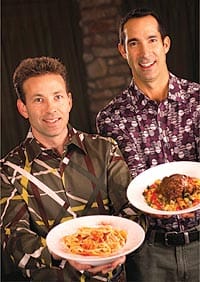 Well, that didn’t take long, did it?

Just over a year ago, when Joel Herzer and Alford Harrison opened Wang’s in the Desert on South Indian Canyon Drive in Palm Springs, the buzz suggested something special was going on in the former home of Flower Drum — lines streaming out the door, celebrity sightings, and the best Chinese New Year’s party in the desert. Of course, plenty of restaurants open like this and quickly become the fodder for “whatever happened to …” conversations.

Not so at Wang’s. Herzer and Harrison forged a successful concept, marrying a family work atmosphere with a friendly, bistro-style dining experience (plus a generous dash of philanthropic spirit for several local and national causes) into what must be considered an unqualified success. It’s no surprise that they’re expanding to the north end of town in late March with the opening of Boscoso, a modern Italian trattoria at 707 N. Palm Canyon Drive. Featuring Northern-style food with both pastas and entrées and a price-point favorable to those dining alone or with groups (about $20 per person for a full meal), Boscoso is the third restaurant for the group behind Wang’s; the first and flagship restaurant, Woody’s on the Beach, is one of the most popular restaurants in Laguna Beach.

The big question is how they’ve managed to turn buzz into solidity, reputation into regular expectation, and been able to get people talking about a restaurant that is, at the time of this writing, mostly drywall and tile work.

“It starts with the people we employ,” Harrison says. “When I hire somebody, I just don’t look at them to be a dishwasher or a server. This might be what they are interviewing for, but how do they fit into the greater scheme of where we want to go, and then we provide the opportunity for them to advance.”

“When you talk to entrepreneurs in this business,” Herzer says, “they all say they started out in the kitchen or as a bartender or washing dishes or waiting tables. It’s a great opportunity for somebody to make something of themselves, to see that hard work pays off, and we’re thrilled to be in the position to help foster that.”

It doesn’t hurt that the food at both Wang’s and Woody’s has been annually rated as among the best, which certainly augers good things for Boscoso. “It will be a new concept in Northern Italian food — lighter sauces, plenty of salads, and an affordable wine list,” Herzer says of his latest venture, which will be smaller and more intimate than Wang’s, with a seating capacity expected to be near 75 (so perhaps make a reservation — right now).

It won’t be a completely alien experience for those comfortable at Wang’s, as familiar faces from both management and the wait staff will be at Boscoso to greet regular customers. Herzer sees this as part of the family environment they’re trying to create. “People return to where they feel comfortable,” he says. If history is any indication, eager diners may wish to stake out a favorite table early.