Look at enough art over enough time and you can eventually tell who painted a canvas with only a glance. The brushstrokes — Guy Rose’s fishhooks or Edgar Payne’s bold, blocky swipes, for example — often hint at a painting’s author. Other times, it’s the color, such as William Wendt’s muted green fields or John Hilton’s pink desert skies.

A knowing eye easily identifies the hand of these early California artists, even 75 to 125 years later. Their work is in the canon of art history, inspiring and intimidating generation after generation of artists trying to find their own voice and style.

Artists like Eric Merrell, a Pasadena-based landscape painter whose fascination with the desert earned him a solo exhibition at La Quinta Museum that continues through May 21.

Merrell knows the deep history of artists who’ve depicted Southern California’s coastlines, valleys, deserts, and mountains. He knows where, what, and how each of them painted. And he knows that he must assert fresh perspectives of the desert landscape — in his own style and over a long period of years — to place himself in the canon, for his work to become unmistakable.

Fortunately, he’s been on this course his entire life, nurtured by parents who instilled an appreciation for nature (his father worked in the seed and flower industry, and his mom was and still is an avid gardener) and educators who encouraged him to take the skills he learned and run steadfastly in his own direction.

Now, in “The Ranges Between,” his exhibition at La Quinta Museum, Merrell is showing 33 oil paintings, two linoleum block prints, and an assortment of sketches and watercolor studies that he created during a 2019 residency in the Mojave National Preserve. 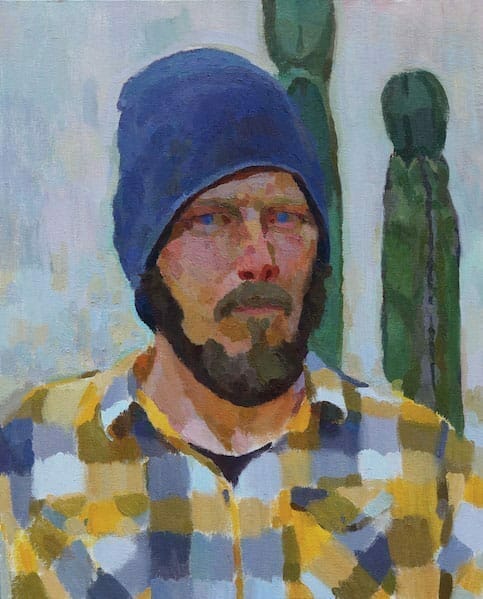 “I did it in two different trips,” he says. Like the early artists, Merrell references his own sketches and studies rather than photographs to create his oil paintings. “The first trip was in February, so we had a lot of inclement weather. Snowstorms came through. I was only able to do small oil paintings, and I drew in my sketchbook quite a lot. I did the second part in November, and that weather was fantastic — 70 degrees and hardly even a breeze. I got some larger work accomplished on that trip.”

An aesthetic evenness prevails as the paintings hang together, a consistency in the way Merrell puts down paint that suggests the “voice” he has been trying to find. Whether looking at paintings such as Crescent Moon and Kelso Peak, Sunset on the Little Cowhole Mountains, or Wind Gust, Soda Dry Lake, you can see the saturated colors and specific techniques Merrell uses to reduce elements of the landscape to their basic shapes.

The Mojave residency was hardly Merrell’s first foray into the desert. That was in June 2004, when he packed his gear into his tiny Toyota Tercel (with manual transmission and no air conditioning), left behind his girlfriend (now wife), and headed out for a few days to camp and paint.

“I had no idea what I was getting myself into,” he recalls. “I was struck by the odd landscape. There’s a lot to the desert, but you have to slow down and spend some time to see it. When I’m out there painting, I’m present in that moment. My goal is to capture the feeling and the experience of being in the desert.”

He and his wife, photographer Ramona Rosales, returned to the desert several times after that outing, and in 2009, Merrell was selected for the coveted Joshua Tree Highlands Artist Residency.

By that summer, the desert had already grown on Merrell.

“It’s the space and the quiet,” he says, adding that he prefers the wide-open Mojave to the trafficked confines of Joshua Tree National Park. “Artistically, it’s a good problem with spatial issues, depth and color. Usually, people paint in the morning because there are shadows, and there’s value contrast. Then you take a lunch break and come back and paint in the afternoon when you have value contrast and shadows again. There’s about a five- or six-hour window in the middle of the day when there were almost no shadows at all. It’s referred to as flat light, but it’s not flat. It’s still three-dimensional. So, I started to figure out if there was a way that I could solve some of it with color contrast instead of value contrast.” 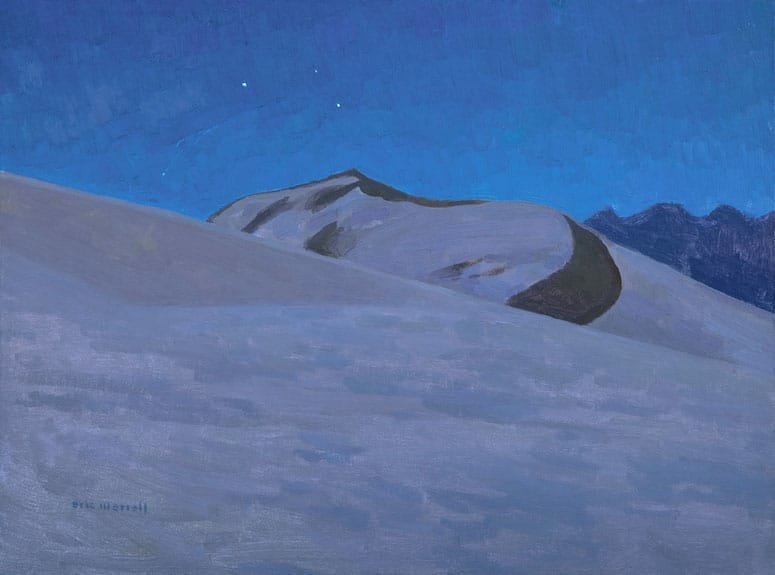 Eric Merrell paints nocturnes, such as Night on the Dunes, under the moonlight

That’s not to say Merrell steers clear of pretty sunsets. He loves the romantic “golden hour,” too.

He has also become a prolific painter of nocturnes, such as Night on the Dunes.

“I would go out [to Kelso Dunes] during the residency when there was a full moon,” Merrell says. “With full moonlight, a lot of the shapes lose their definition, the edges blur, and the shadows are strange to figure out with the curve of the dunes.”

In addition to the Southern California deserts, Merrell has painted throughout the Sierra Nevada and San Gabriel mountains, along the Pacific Coast, and on the East Coast, where he began his professional training.

A native of Gilroy in Northern California, Merrell, 44, started after-school art classes when he was a fifth-grader in Rochester, New York, where his parents moved the family for about seven years. As he was finishing high school, he won a scholarship to University of the Arts in Philadelphia, where he studied illustration for two years before transferring to ArtCenter College in Pasadena. He earned a BFA with honors in 2001.

Rather than follow other ArtCenter grads into jobs creating backgrounds for movie sets and video games, he sought opportunities through California Art Club, which was founded in 1909 and counted most of the top early California artists as members. Many of them — such as Sam Hyde Harris, Alson Skinner Clark, and Benjamin Brown — painted the deserts. Merrell has served the organization as its historian and as a workshop instructor throughout the state.

Over the years, he has exhibited at Autry Museum of the American West, Frederick R. Weisman Museum, National Cowboy & Western Heritage Museum, USC Fisher Museum of Art, and other institutions.

It will not be long before Merrell returns to the Mojave Desert. He wants to pursue several ideas that he couldn’t fit into his residency, many of them drawn from that early California history. “[The landscape] hasn’t changed a whole lot,” he says. “I’ve read books about the California deserts and some of the earlier days. A few of them are so specific in their descriptions of where they’re traveling that you can still find those things on Google Earth — the canyons that they walked through and things like that.”

Merrell likes to paint what he loves, he says, and the desert has become an enduring affair — the quiet and challenging place where he’s finding his voice.