Escape to the Coast! 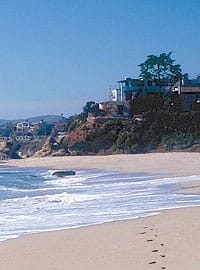 The cool getaway you need is only a couple of hours away. Palm Springs Life staff picks the best hotels, restaurants, shopping destinations, and must-see attractions from San Diego’s Gaslamp Quarter to the Orange Coast (pictured: Laguna Beach) to Santa Monica and inland to the new downtown Los Angeles. Make your reservations, pack your bags, and escape to the coast!

We are standing on a plateau overlooking the ancient coastal wetland south of Carlsbad. My husband Bart looks into the blue lagoon, where he had hoped to cast a fly until we discovered it was protected, off-limits even to catch-and-release. California Indians once lived along its shore. Today, snowy egret, deer, rabbit, and great blue heron share the lagoon with tranquility-seeking visitors.

Restoration of the Batiquitos Lagoon is an environmental success story. Industrial progress helped denigrate the area: the California-Southern Railroad crossed the lagoon in the 1880s, and the Pacific Coast Highway was constructed in 1912. Besides debris left behind from those construction projects, heavy rains and severe flooding in the 1920s and ’30s silted the lagoon, blocking its outlet to the Pacific and essentially turning it into a freshwater pond. Reclamation to restore the daily tidal action began in 1994. Now a flourishing wildlife preserve, the lagoon harbors an abundance of natural food, and the calm, shallow water makes an ideal nursery for young birds and fish.

Batiquitos Lagoon is the centerpiece of Aviara, a 1,000-acre resort community that includes a Four Seasons hotel, a cutting-edge spa, the only Arnold Palmer-designed golf course in the San Diego area, and a nonpareil Italian restaurant appropriately named Vivace, meaning “full of life.” An amalgam of the terms “aviary” and “terra,” Aviara reflects the resort’s harmonious relationship with the surrounding landscape. Set on a hilltop with breathtaking views of the ocean and lagoon, Aviara’s rolling valleys cradle the golf course overlooking the lagoon. As its full name — Four Seasons Resort Aviara — implies, the resort combines stunning natural scenery with some of Earth’s most civilized pleasures.

The hotel offers round-trip shuttle service down the steep hill to the golf course and lagoon. Walking the lagoon’s packed-dirt pathways beside thickets of wildflowers and stands of cottonwood trees, we caught the scent of anise. Later, seated on an outdoor terrace at the hotel bar, aromas of grilling meat wafted through the air alongside the music of a classical guitarist. At Sunday brunch the next morning, the same musician turned his instrument into a fountain of jazz harmonies. In contrast, during afternoon tea, a harpist gave the lounge an ethereal feel.

On Saturday, while Bart took on the challenging hillside golf course, I enjoyed a massage. To reach the spa and exercise rooms at the pool level, you pass sculptured walls of flowing water and follow the wondrous fragrances from flowers and candles. Guests meet their massage therapist in a sky-lit solarium. I could have selected one of the spa’s “indigenous California treatments,” such as the hydrating avocado body wrap or citrus sugar rub. Instead, I chose an aromatherapy massage. In a darkened room filled with Enya-esque music, a deft therapist massaged me with lemon, peppermint, and chamomile oils — a personalized combination to destress and energize.

Afterward, I headed up to the alfresco terrace at the hotel bar, where I met Bart, sipped martinis, and shared a seared scallop appetizer so fresh it still tasted of the sea. That addictive morsel sealed our determination to reserve a table for the hotel’s sumptuous seafood buffet, a popular Friday night event, during our next visit.

Our hunger fueled, we noticed an intriguing “Chef’s Tasting Menu” on display at the adjacent Vivace. An overabundance of sensual pleasure had piqued a “go-for-it” attitude that we continued to indulge. So, after an antipasto loin of venison filled with fois gras, we luxuriated in a primi course of fettuccine pasta sauced with veal Bolognese, followed by braised leg of rabbit laced in a morel and sherry wine sauce. We finished with moist peach compote served warm with a dollop of vanilla bean gelato.

By Sunday checkout time, we had sampled every Aviara dining area. We found the poolside restaurant serving imaginative dishes in a casual, open-air atmosphere. We followed our halibut-topped green salad with a cloudlike coconut ice cream. And the small Argyle restaurant at the golf clubhouse had perfected its myriad omelet offerings. So much food, so little time.

We found many ways to enjoy this lush and elegant resort — an island of peaceful plenty with ocean and city so close to its borders. Each offers reason enough to plan a trip. Altogether, they make an irresistible package of getaway pleasures. — Sharon Apfelbaum

• The San Diego Padres take the field at their architecturally impressive new digs. Designed with fans in mind, Petco Park (100 Park Blvd.) situates most seats to face home plate, and batting cages are at club level, where diners can watch players practice through a one-way window. Information: www.padres.com.

If a slow boat to China’s out of the question, a slower drive to Santa Ana could be almost as enriching an experience. Bowers Museum’s impressive exhibition, Tibet: Treasures from the Roof of the World, includes nearly 200 artifacts from the Dalai Lama’s Potala Palace, the Norbuglinkha collection, and the new Tibet Museum in Lhasa — most of which have never traveled beyond Chinese borders and all demonstrating the sophistication of art created for the nobility of this great world culture.

The exhibition, which continues through Sept. 12, offers a glimpse into a mysterious culture that most Americans see as isolated and struggling to maintain its traditions — a sort of Shangri-La flanked by the Himalayas in Central Asia. Museum President Peter Keller took six trips to the ancient land to negotiate the contents of the exhibition.

“People travel thousands of miles to see these priceless artifacts,” says museum spokesman Rick Weinberg. “This is the first time the finest examples of Tibetan art — sculpture, painting, and textiles — and ritual Buddhist objects are being exhibited in the Western world.”

In the first section, informative panels, an illustrated timeline, photomurals, and artifacts provide a primer on Tibetan history and culture. It includes the beautifully crafted, gilt copper sculpture of Songtsen Gambo — a rare surviving image of the king who united Tibet into a strong empire and established Buddhism as its dominant religion in the seventh century. This section also includes the Seal of the Fifth Dalai Lama (r. 1617-1682), the spiritual leader of Tibet who built Potala Palace in Lhasa to house religious and government offices.

The next section explores Tibetan Buddhism through unique objects, which include detailed descriptions of ritual context penned by Clark, a specialist in Tibetan Buddhist practices. Among the objects are Tibetan prayer wheels and the ornate Kapala, a bowl is made of a human skull, likely from the body of an important teacher. Use of the sacred skull showed respect for the deceased. In the accompanying audio, practicing lamas reveals rituals against a background of chant-ing and musical interludes featuring the distinctive trumpets, drums, and conch shells used in ceremonies.

The colorful and familiar thangkas, or devotional paintings, appear with exquisite sculptures in the third section. Many of the 20 thangkas were painted on stiffened canvas and framed with borders of Chinese brocade; others were embroidered, appliquéd, or woven into subjects that include deities and important Tibetan figures. Mahakala, a protector deity worshipped by all Tibetan sects, was immortalized in an important sculpture that dates to the 12th or 13th century.

The final section highlights art rarely seen in the United States — costumes, jewelry, and exquisitely crafted vessels, which were used during daily and ceremonial activities.

Following its Orange County debut, the exhibition travels to the Houston Museum of Natural Science and arrives at its final tour stop, the Asian Art Museum of San Francisco, next June. — Steven Biller

• Las Brisas (361 Cliff Drive, Laguna Beach), situated on a cliff above Laguna Beach and named after Acapulco’s most famous resort, is a history-rich restaurant — with a recently added ocean-view patio — that serves breakfast, lunch, and dinner, as well as one of the best Sunday brunches on the Southern California coast. Information: (949) 497-5434, www.casagallardo.com/lasbrisas.

You can probably recite a list of reasons to avoid downtown Los Angeles. We appreciate your effort — but beg to differ. What you need is a brisk walking tour to see the renaissance that’s making Grand Avenue truly grand — and well-timed visits to The Museum of Contemporary Art and Walt Disney Concert Hall.

The Los Angeles Conservancy offers no less than 14 different walking tours to suit your interests and expand your horizons. Here are six favorites (for information about others, point your Web browser to www.laconservancy.org):

• Biltmore Hotel (second Saturday) — Go behind the scenes at this venerable and glamorous landmark hotel.

• Highland Park (June 12 and Sept. 11) — One of Los Angeles’ oldest neighborhoods, the Sycamore Grove area of Highland Park has a rich and varied history. This tour features visits to the Southwest Museum’s Casa de Adobe, a 1917 replica of an 1800s hacienda, and La Casita Verde, a Victorian home formerly known as the Ziegler Estate.

• Marble Masterpieces (July 10) — From light fixtures to floors, stair railings to sculptures, this tour explores the types and uses of marble in the historical and modern buildings of the financial district.

Meanwhile, MOCA at California Plaza (250 S. Grand Ave.) continues its popular exhibition, A Minimal Future?, through Aug. 2. The largest U.S. museum exhibition to examine the emergence and foundations of minimal art includes more than 150 selections and bodies of work from 1958 to 1968 by 40 American artists who emerged by the early-to-mid-1960s. Information: (213) 626-6222, www.moca.org.

• Shutters on the Beach (One Pico Blvd., Santa Monica), Los Angeles’ only hotel with rooms smack on the beach, feels “more Cape Cod than SoCal,” says Lark Ellen Gould in the new book Los Angeles Off the Beaten Path. “The place is sort of like a sprawling summer beach compound that’s been in the family forever.” The family would have fine taste in art, as original pieces by David Hockney and Roy Lichtenstein adorn the property’s common areas, which include two fine-dining rooms. Information: (310) 458-0030 or (800) 334-9000, wwwshuttersonthebeach.com.

• A few steps from Shutters on the Beach is Third Street Promenade, a pedestrian-only street with shops, bookstores, and cafés and restaurants. Hennessey & Ingalls, the West Coast’s largest art and architecture bookstore, shares the road with popular chain stores such as Z Gallerie, Urban Outfitters, Fred Segal, and Abercrombie. Inland, you’ll find the industrial Bergamot Station (2525 Michigan Ave., Santa Monica), named for a trolley stop and featuring more than 20 art galleries and the Santa Monica Museum of Art. Information: www.bergamotstation.com or www.smmoa.org.

Main Street between Venice and Santa Monica has become a boomtown — sort of a Worth Avenue or Greenwich Village — with retailers, coffeehouses, and high-end furniture stores. Along the way, stop at the city’s Heritage Museum (2612 Main St., 310-392-8537) and, just up the street, Moonlight Rugs & Art, which sells Eames-designed furnishings and art. We’ll assume you can find your way to Rodeo Drive, the epicenter of luxury shopping in Beverly Hills.