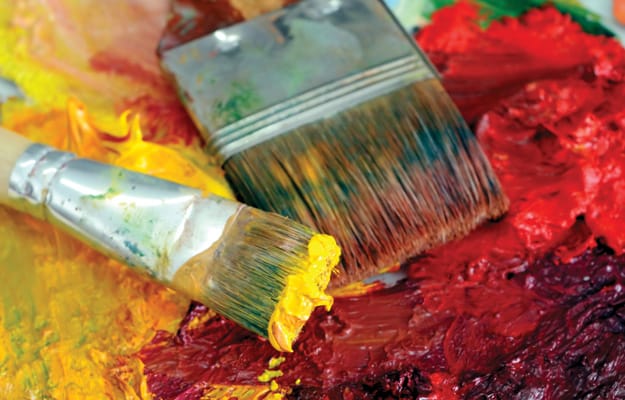 Five days a week of radiation treatments left Maurice Engleman of Palm Springs with “bad days and worse days.” The 82-year-old was diagnosed with cancer of the tongue a week and half after his wife of nearly 60 years died in December. The radiation chapped and pained his lips, and he lost his sense of taste. But he still had his music.

“This can be a life-threatening thing that I have, and I very much love life. It is discouraging to me that maybe I better face it and get my things in order,” Engleman says. “I will take my violin and play and maybe get lost in it so I am not thinking about the seriousness of cancer.” In March, while he still was undergoing radiation therapy, he performed a concert with the Coachella Valley Symphony.

“I really am getting that wonderful broad band of empathetic response from everyone in the orchestra,” Engleman says. “You feel what the bassoon and clarinet and other violins are doing, and they feel you.”

If music relieves the effects of cancer for Engleman, surely it has the ability to make us feel better when we have less-substantial problems. According to the American Music Therapy Association, music promotes wellness, reduces stress, alleviates pain, helps people express feelings, enhances memory, improves communication, and aids physical rehabilitation.

“All societies have some form of music and use music in major life events,” says AMTA spokesman Al Bumanis. “There’s an emotional connection to music that in itself is enough to suggest that music is a powerful entity.”

Aristotle and Plato recognized the healing influence of music. During World Wars I and II, veterans hospitals hired musicians to ease the physical and emotional suffering of soldiers. And music therapy became a degreed healthcare profession after Michigan State University founded a program in 1944.

Even the government and insurers acknowledge the benefits of music therapy. AMTA reports that at least 20 percent of music therapists receive third-party reimbursement, be it from Medicare, Medicaid, or private insurers.

In 1993, Bill Protzmann, a pianist in Idyllwild, began researching the connection between music and the brain after noticing the transformative effects his performances had on audience members. Now he guides audiences to “intentional listening.”

“If you bring your intention to listening with the purpose of uncovering feelings, it sort of supercharges the whole process of emotional healing,” Protzmann says. In May, he gave a performance in Pacific Beach for soldiers with post-traumatic stress disorder (all the ushers were trained therapists).

“I am not a psychotherapist or doctor. I am just somebody who understands how music breaks through that,” Protzmann says. “So my goal is to give them a way to experience affirming emotions and to be the bridge between a whole community of people who much need healing and change and a large community of therapists and organizations who can help.”

“When people begin to listen to music, they move into their emotional brain,” says Deborah Meints, a licensed marriage and family therapist at Village Counseling in Palm Desert. “It’s stimulating without being anxiety producing.”

To achieve the wellness benefits of music, one need not have the trained voice of, say, Luciano Pavarotti or the playing skills of someone like Engleman, though most music therapists, according to Bumanis, emphasize participatory activities rather than passive listening. “You can look at it as socialization,” he notes, whether that means singing in a chorus, jamming with other instrumentalists, or joining a drum circle.

Even listening to music, however, has proven beneficial. Avram Goldstein, a neuroscientist at Stanford University, concluded in a 1980 study that music releases endorphins, the body’s natural painkiller and mood booster.

Cleveland Clinic has conducted several studies on the effects of listening to music, including one with 40 people who had been experiencing pain from osteoarthritis, disc problems, and rheumatoid arthritis for an average of 6.5 years. Using pain measurement scales, researchers found that the group of 20 who listened to an hour of the music of their choice for a week experienced 12 to 21 percent less pain than the 20 who received no music therapy. The music group further reported feeling 19 to 25 percent less depression and 9 to 18 percent less disabled than those in the control group.

As this and other studies have shown, the type of music that most benefits an individual is just that: individual. One person’s Beethoven is another person’s Beyoncé. Opera soothes nerves for some people; reggae does the same for others. “The music you like must have a positive effect on you,” Bumanis says.

Twenty-one-year cancer survivor Jean Hopkins of Palm Desert firmly believes in the healing properties of art. A former nurse and lifelong artist, she faced the challenges of having cancer with an art-based support group.

“When I was painting, I was expressing how I felt about my body, about the feelings that were inside of me. It was helping me to express my feelings, to look at my feelings, to know my feelings, and therefore to get control of them and move forward,” she says. At an American Cancer Society event in April, Hopkins exhibited her paintings from an Arts in Healthcare class at Eisenhower Medical Center in Rancho Mirage. She also volunteers to take a cart full of art supplies from patient room to patient room.

Sandy Miller of Palm Desert, a cancer survivor since 2001, exhibited a watercolor that she says evoked in her a sense of freedom. Every Friday, she attends an art class at Eisenhower. “I had never done any art at all,” she says, but she has now tried a variety of art forms. “It takes you away for a while from everything on the outside, and it’s very peaceful,” she says.

Judy Rollins, a registered nurse and adjunct assistant professor at Georgetown University School of Medicine in Washington, D.C., calls this the gate control theory. “If you are distracted, these gates close and keep [pain sensations] from reaching the brain,” she explains.

“Psychological and physiological change can happen when people participate in art therapy,” says Dr. Anita Chatigny, director of oncology supportive care services at Comprehensive Cancer Center in Palm Springs. “We know when people engage in some form of artistic endeavor — music, going to the museum, being engaged in something that is not a problem-solving process — there is more of a connection of the heart. When people engage in these types of things, the resting heart rate, blood pressure, muscle tension can all shift. It triggers the relaxation response in the body.

“It channels varied, maybe conflicting, emotions,” she continues. “So art is a way to consolidate feelings. On a functional level, when they engage, it’s that much less time that they have to worry.”

A 2008 report on a study at the University of Bari in Italy concluded that even viewing a beautiful painting could reduce a person’s perception of pain. A dozen subjects were asked to select 20 paintings they considered the most beautiful and the most ugly from a selection of 300 works. They were then asked to contemplate the paintings while researchers zapped their hands with a short laser pulse. The subjects rated pain a third less intense while viewing beautiful paintings compared with ugly paintings or a blank panel.

“When we are soothed, we go into a slower brainwave pattern,” Meints says. That relaxed, alpha state produces feel-good endorphins. “Music therapy and art therapy and poetry and literature allow us to see that when we are in a different atmosphere, we have the capacity to be moved.”

The University of Michigan Health System’s Gifts of Art Program includes, among other things, nine art galleries, weekly performances by professional musicians and actors, and an opportunity for patients to select framed prints to hang in their rooms for the duration of their stays. “When people can choose the art in their room, it gives them a sense of power in a situation that often makes them feel a lack of control,” says Communication Coordinator Carrie McClintock.

More and more universities, health professionals, artists, and arts organizations have begun recognizing the value of arts therapy education and programs. The Museum of Modern Art in New York has established the Alzheimer’s Project, in which specially trained museum educators guide people with Alzheimer’s disease through tours and discussions of works in the museum’s galleries. Participants are able to connect the art to their lives and experiences, to other works, to the world, and to each other. As part of the initiative,
the museum has developed a project guide for other museums to initiate similar programs.

The arts may not be able to replace medication entirely, but clearly they are less costly, less risky, and certainly more pleasurable.

• Eisenhower Medical Center in Rancho Mirage started using the aesthetics of music as a healing tool in 2001 when harpist Jeannette Debonne began playing for patients. Now Debonne directs a widely expanded program that includes music, visual arts, and writing workshops for patients, their families, and hospital staff, as well as bedside art projects and music (harp, classical guitar, and Native American flute). “It gives the patient a focus other than the chaos of a cancer diagnosis or a serious illness,” Debonne says. “People report reduced stress and anxiety. They are able to sleep better. With the relaxation response invoked, the body can heal itself at a more rapid rate.”

• The Comprehensive Cancer Center at Desert Regional Medical Center in Palm Springs offers art classes and bedside art therapy. “We also have Lenscape, the first program of its kind in the country,” says Dr. Anita Chatigny, director of oncology supportive care services. “We give [patients] a camera and say, ‘Take pictures of things that are meaningful to you in this journey.’ Then an art therapist works with them to make collages.”

• Gilda’s Club Desert Cities in Cathedral City offers workshops for adults and children whose lives have been impacted by cancer. Over the past year, they have included a three-day workshop that incorporated the principles of feng shui in clay work, drumming, and journaling. Visiting artists help Gilda’s Club members make tile mosaics and papier-mâché. A slide show lecture showed clients how to express themselves through a variety of creative media, and a harpist used her instrument not only for its musicality but also for its vibratory flow, says program director Argentina Serrano-Baldridge. Art is also featured in Gilda’s Noogieland for children. A semi-annual, one-day “camp” includes arts and crafts projects, piano story telling, and dance performance.