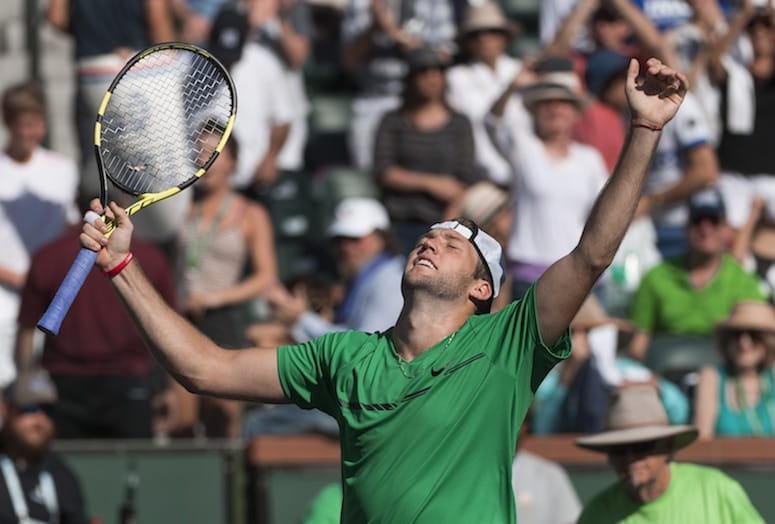 What is one to do?

Well, one might not do better than to get out to the BNP Paribas Open at Indian Wells, where, between the surrounding Santa Rosa Mountains that send down whispers of eternal ongoingness on warm breezes and the chance to catch glimpses of human perfection within the lines of a royal blue tennis court, you just might experience the merging of your two selves, without sitting on a yoga mat or prostrating yourself before a god not named Roger Federer.

I’m talking about a feeling of wholeness that can’t even be approached watching tennis on TV. Part of the reward of proximity—of sitting a mere fifty feet from a ball exploding off the racket of America’s best player, Jack Sock—is that identification becomes that much easier: we start to believe, during the course of a match, that we can actually hit a 105 mph forehand to the corner for an outright winner.

Speaking of distinction: anyone who’s ever striven for perfection and managed to catch some of it has had at least a little taste of what it might be like to wander the earth as a Roger Federer.

Or is that the 105 degree heat, beating our talent for making distinctions out of our head?

Speaking of distinction: anyone who’s ever striven for perfection and managed to catch some of it has had at least a little taste of what it might be like to wander the earth as a Roger Federer. Even someone who has reached a slightly higher rung and been on the receiving end of an attendant rejection from others has experienced the loneliness that one can be condemned to on the road to personal improvement and achievement.

A tournament like the BNP Paribas Open serves as a corrective, for both the perfect and the admiring imperfect. For beauty, human-made beauty of the kind that a Roger Federer produces, is not something that anyone, neither Federer nor his fans, can be completely happy about in loneliness. This kind of beauty demands witnesses. It requires a community. We love Roger’s newly transcendent backhand together with others. And, yes, he needs us to see it, feel it, hear it, together.

Despite the tributes to self-sufficiency relentlessly paid by the our culture, beneath any attempt to interpret human excellence is the fact that the destiny of the individual is not just social but communal, and nowhere does one feel this more intensely than in Stadium 1 at Indian Wells, where fans this week have been treated to a 35-year-old Federer playing out what could easily be some of the valedictory days of his unprecedented and unmatched career. Sitting in the packed loge seats, we commune with one another and with him, fathoming finite being, the poignancy of his late surge of greatness always part funereal, part glorious will-to-power.

As with the last years of Agassi’s late, great run, you watch Federer not just in the present, not just for the significance of this particular match against Steve Johnson or Rafael Nadal, but with the arc of his entire career in your heart and stomach. Afterward, after each match, the stakes can retrospectively seem outsize, grossly disproportionate to the actual stakes of this one match; but to be here in person… If Roger wins, life wins, aging is held off, beauty and grace and form beat chaos and entropy and death, and those ageless hills we keep glimpsing between the upper level sections—reminders if there ever were any of the vastness and longevity of the universe—are suddenly not so indifferent. 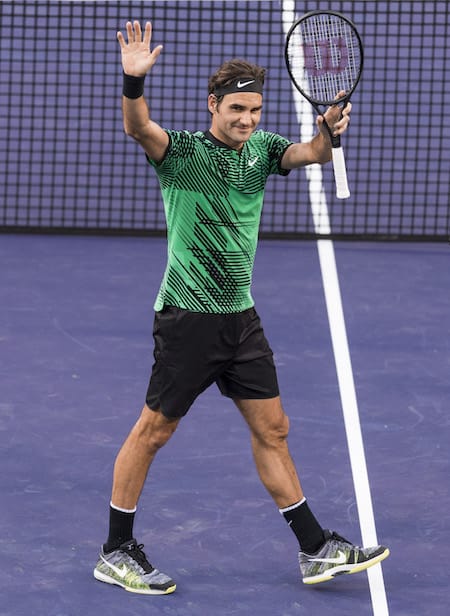 Roger Federer received a pass into the BNP Paribas Open semifinals after Nick Kyrgios pulled out of the quarterfinals due to illness.

In short, we’re significant. Ever since the Copernican revolution, man has been deposed from his place in the center, the result being that he too often has been relegated to being a means to an end. But Federer winning, winning now, shows us that human action can, for a time, be the equal of human dreams, that we can be integrated into a universe that, again, for a time, can belong to us in both form and feeling. When we watch Roger flying against the lunar mountains, we can feel, again, that the most valuable things in life are great and specific human achievements, not vague abstractions, and not even the gifts of some nature that is separate from us. In this sense, a day at Indian Wells is no holiday from reality, no mere amusement, but a chance to experience the beautiful as something hardly distinguishable from gratitude.

Of course if he loses, we’re all thrown into being realists. The saddest thing. At least for this moment.