At Sixth and Cesar Chavez streets in Coachella, Italian artist Edoardo Tresoldi juxtaposes Baroque-inspired architecture with the city’s desert landscape in the form of a ghostly wire-mesh sculpture titled Etherea.

The 54-foot-tall structure debuted as one of three pieces erected at the Coachella Valley Music and Arts Festival in 2018. It was later was donated by event organizer Goldenvoice to the city of Coachella, which transformed an empty lot into a public park to showcase the sculpture and make it accessible to visitors.

Etherea seemingly breathes with the wind and clouds, and its optical effect shifts with the light, atmospheric conditions, and perspectives of viewers as they move around and within the structure. (Yes, you can go inside.) Ultimately, it’s a space dedicated to simple actions: staring at the sky, observing the clouds, contemplating life. 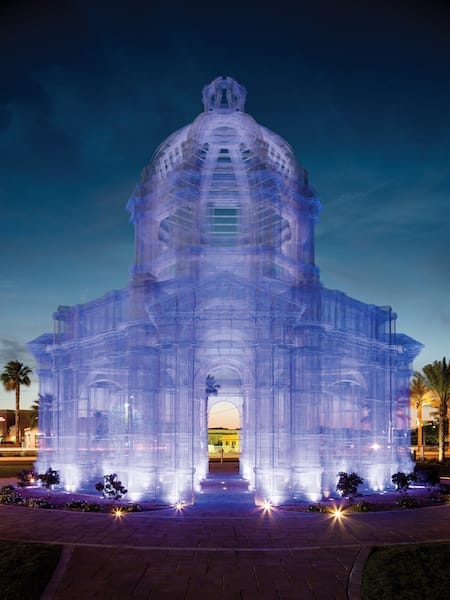 Etherea is one of several art installations that found permanent homes in the area after originally being unveiled at Coachella festivals, including Don Kennell’s metal-plated Roadrunner and Yard Dog in La Quinta and Randy Polumbo’s 50-foot-tall futuristic flower Lodestar in Bombay Beach.

• READ NEXT: 7 Outdoor Sculptures to Add to Your Artistic Journey in Greater Palm Springs.