Eureka! Indian Wells: This is a Restaurant to Find 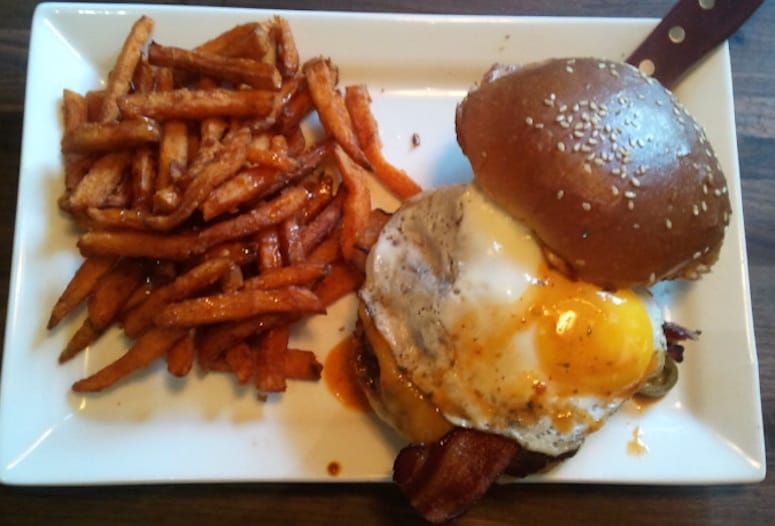 When a new restaurant opens, the first thing everyone wants to know is, “What type of food do they have and what should I order?”

To help answer these pressing questions for Eureka! Indian Wells, which opened about a month ago, I stopped by the restaurant and took a whirlwind tour through a bunch of their top-selling dishes and artisan spirits.

“We enlist local vendors to supply our produce, our bread is handmade every day, and our meats are vegetarian fed and free of hormones and antibiotics,” says Beverage Director, Jonny Barr.

“Another thing that really sets us apart from everyone else is our very unique bar program,” says Barr. “We’re doing what’s called a ‘brown bar,’ which features small-batch whiskeys and craft beers.”

Barr lined up a flight of whiskeys for me to try including Corsair Triple Smoke Single Malt Whiskey.

“It’s made after a true Scottish whiskey with peat, birchwood, and cherry wood which gives it a smoky flavor,” says Barr. “A lot of our guests tend to be Scotch drinkers, so this is a great alternative when you’re looking for a smoky, peaty Scotch whiskey.”

A few dishes you won’t want to miss include the Lollipop Corn Dogs made with all-natural sausage that’s been hand battered in sweet cornmeal.

“I’ve eaten these every day for the last four years,” says Barr.

And it was love at first bite when I got a taste of the Shredded Chicken Tacos, which come with handmade pico de gallo, shredded cabbage, a spicy chipotle sauce, a little bit of avocado, and a sliver of jalapeño.

Barr paired them with 1500 Dry-Hopped Pale Ale. “It has a great hoppy aroma and pairs well with the slight spiciness and sweetness you’re getting from the chipotle sauce,” he says.

And of course, there are a large number of phenomenal burgers to choose from. The Jalapeño Egg Burger comes piled high with cheddar cheese, crispy bacon, pickled jalapeños, an egg over easy, and is drizzled with chipotle sauce. It was accompanied by a side of golden sweet potato fries that had been tossed in cinnamon and drizzled with a little bit of honey.

To complete your meal, try the butterscotch pudding sprinkled with sea salt and topped with handmade whipped cream. While it might sound unusual at first, Barr paired this dish with Yeti Imperial Stout.

“A lot of people like espresso or coffee with dessert, and this stout has a lot of coffee characteristics,” says Barr. “It’s really soft and pairs really well with the pudding, which is my favorite dessert.”