Evan Christopher Returns to Idyllwild to Headline Jazz in the Pines 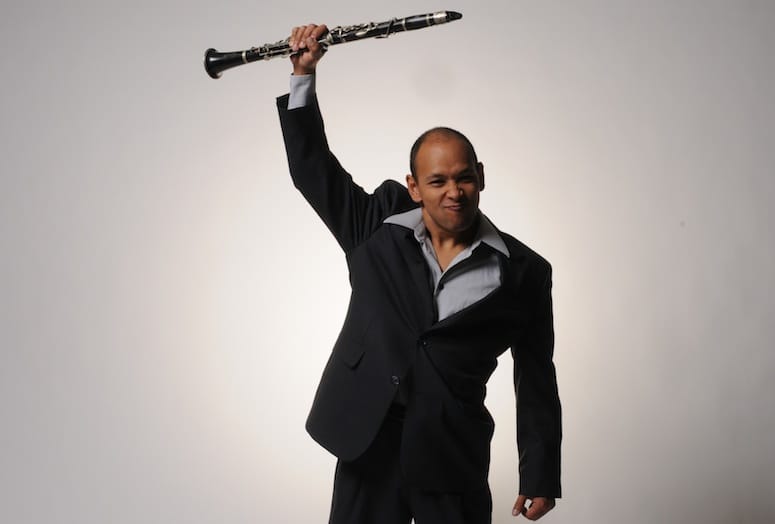 Or rode a horse.

It was in Idyllwild.

At age 16, world-renowned clarinetist Evan Christopher was attending Los Alamitos High School and nearly dropped out. Then he went to a summer jazz camp at Idyllwild Arts and they convinced him to spend his senior year there.

“I was bored (in public school), and only needed two classes to graduate, and Idyllwild Arts needed bodies,” Evan Christopher says during a phone interview from his home in New Orleans. “There was no orchestra back then. There was one string quartet, one brass quartet, one woodwind quintet and a choral group. It also had some piano and guitar majors.”

In 1987, Christopher was part of the first graduating class at Idyllwild Arts, formerly known as ISOMATA or Idyllwild School of Music and the Arts.

Now he’s returning this week as a headliner for the 21st Annual Jazz in the Pines, Aug. 16-17, on the art school campus. Christopher will perform Aug. 16 with fellow Idyllwild Arts alum, trombonist Jason Jackson. “We would take our academic classes there in the mornings,” Christopher recalls. “I hadn’t had a formal music lesson (in clarinet, but had taken piano lessons for several years). One time, I was banging on the piano in a spare room and Marshall came in. He offered to teach me how to play jazz piano.”

At that time, Hawkins was teaching tennis and girls basketball at Elliott Pope, but music was his passion. For years, he played the bass for Miles Davis.

“With Marshall, I started experimenting with harmony,” Christopher recalls. “He taught me jazz harmony using the piano as a tool.”

Each week, Christopher would also take clarinet lessons with Dr. Philip Rehfeldt at Redlands University. Elanie Moore, an art teacher at ISOMATA, was his driver, and later became a good friend. They have stayed in touch over the years.

“Evan had star quality back then,” Moore says. “He had drive, focus, and was very dedicated to practicing his music. He would often walk off somewhere to play.” In 1987, Christopher played with professionals in an annual concert organized by Hawkins that was a precursor to Jazz in the Pines. They were held before 200 people at Rush Hall.

“I got to share the stage with professionals like Jimmy and Jeannie Cheatham, Joe Azarello, Bob Boss, Roy Gonzales, Flip Oakes and the late John Harris,” Christopher says. “They were so encouraging and that gave me the confidence to consider music as a career.”

“Paris is my band base now,” Christopher says.

Yet, it was living and working in New Orleans that changed his views on jazz.

“Most people think that the New Orleans style of music is a subgenre of jazz,” Christopher says. “But it’s actually the opposite.”