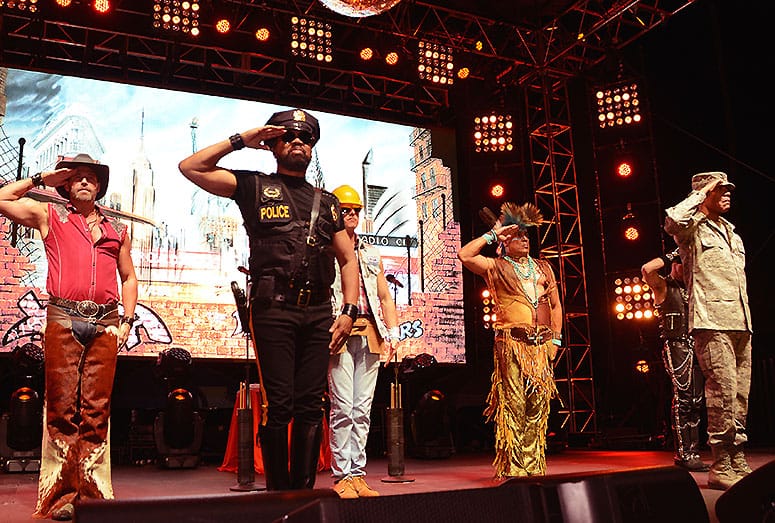 The 23rd annual Evening Under the Stars was held on the lawn at the O’Donnell Golf Club to benefit AIDS Assistance Program (AAP) – Food Samaritans.

When AAP began 25 years ago, the organization was able to feed only low-income HIV/AIDS patients with $100 food vouchers each month. The organization is now able to support any low-income person with a chronic illness whose annual income does not exceed $17,500 annually. More than 2, 200 clients have received more than $9.5 million in direct client services since 1991.

The disco theme was apparent when walking the “pink” carpet and ogling many attendees in disco apparel. Hot pink tights, men in white linen suits, fringed miniskirts and blinged-up disco boots substantiated that the 1,100 guests were expecting a lively evening.

Guests enjoyed the cocktail hour, and spent time and money in “The Marketplace” filled with elegant and extravagant goods running the gamut from Baccarat crystal to Michael Childers’s signed photographs.

Guests were encouraged throughout the evening to text their pledges to AAP with their names and messages. This information was continually looped on a large video screen that served as a backdrop throughout the awards presentations and dinner, allowing guests to watch the results of their donations adding up to meet the evening’s goal of $250,000.

Disco-colored tables were set throughout the lawn and on platforms placed on either side of the awards ceremony stage.

It appeared that Savoury’s had choreographed their staff to present perfect dinners to the 1,100 guests simultaneously. Immediately following the first course, Brooke Beare, news anchor of CBS Local 2 and KDFX Fox 11, introduced a video that depicted the relationship between AAP and Eisenhower Medical Center — the health care sponsor.

This was followed by a compelling award presentation to four outstanding women who have worked on behalf of the treatment and cure of AIDS. Recipients were California Senator Barbara Boxer; award winning writer and playwright Jane Wagner, who is also known for creating the character “Edith Ann” for her wife, Lily Tomlin; Cathy MacNaughton of Managed Health Network for her contribution to AIDS Assistance Program as well as many other charitable groups; and Desert AIDS Project Board member Dr. Terri Ketover, PhD, for her incredibly successful work on AAP’s fundraisers and special events.

Senator Boxer said she has been acutely aware of this issue since she began her career as a California Representative to the House in the 1980s when AIDS was first diagnosed. Although she is retiring from her Senate position, she will continue to care and “won’t quit until there is a cure!”

The evening concluded with an appearance by The Village People and a rush to the dance floor as their energetic, colorful, and familiar performance began. Disco spirit was alive and the evening ended with the Village People’s widely known song, YMCA, followed by a magnificent fireworks display.