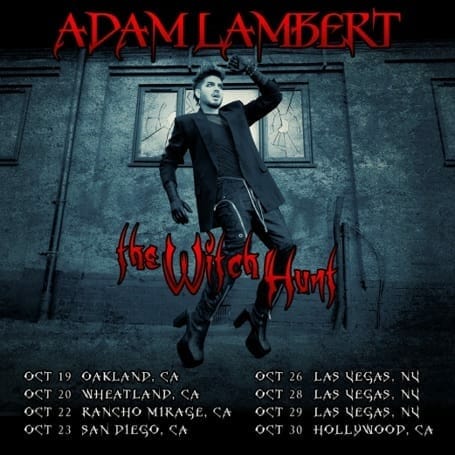 On the heels of a major Las Vegas engagement announcement, GRAMMY-nominated singer-songwriter Adam Lambert will continue the Halloween excitement, bringing his spectacularly spooky extravaganza “The Witch Hunt” down the Southern California coast for a five-show limited run this October. The tour includes a performance at Agua Caliente Resort Casino Spa’s The Show on Saturday, October 22 at 8:00 p.m. Tickets are on sale this Friday, July 29 at 10:00 a.m.

Lambert will kick things off on Wednesday, October 19 at the Paramount Theater in Oakland, CA, followed by stops in Wheatland, Rancho Mirage, and Lambert’s hometown of San Diego, before wrapping up in Hollywood, CA on Sunday, October 30 at the famed Hollywood Palladium. The SoCal dates add to an already eventful month for the superstar, who recently announced he will bring “The Witch Hunt” to Encore Theater at Wynn Las Vegas for a three-show limited engagement to celebrate Halloween weekend Las Vegas-style! Fans can experience Lambert’s vocal powerhouse performance of his smash hits for three unforgettable nights on Oct. 26, 28 and 29, 2022 at 8:00 p.m. Tickets are on sale now on Ticketmaster.com and WynnLasVegas.com.

Since first displaying his singular and uncontainable talent on the American Idol stage in the show’s eighth season, the San Diego-raised glam rocker has laid down the gauntlet to any and all modern performers looking to thrill audiences. Known for his dynamic vocal performances that fuse his theatrical training with modern and classic genres, Lambert burst out of the gate with 2009’s For Your Entertainment, which showed off his dance floor strut and pop star sheen, while 2012’s Trespassing allowed Lambert to work out his first-in-class tenor on emotion-laden ballads as well as funk rockers. Lambert has sold more than 3 million albums and 5 million singles worldwide.