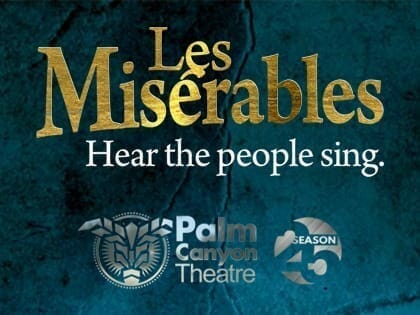 Come out to Hear the People Sing, Les Miserables at Palm Canyon Theatre in Palm Springs

The triumphant musical; Les Miserable is set against the backdrop of 19th century France. Based upon Victor Hugo’s epic novel, Les Miserable tells the story of broken dreams and unrequited love, passion, sacrifice and redemption. A timeless testament to the survival of the human spirit. This epic and uplifting story has become one of the most celebrated musicals in theater history. The magnificent score includes the songs “I Dreamed a Dream” “On My Own” “Bring Him Home,” “One Day More” Empty Chairs, Empty Tables” and many more. Les Miserable will run January 28 through February 13, 2022, at Palm Canyon Theatre (PCT), 538 N. Palm Canyon Drive. For tickets or other information, call the PCT Box Office at 760-323-5123 or order online at PalmCanyonTheatre.org.

The original Broadway production of Les Miserable in 1987 won eight Academy Awards including Best Musical, direction, score, and book. One of the longest running productions, closing after 6,680 performances. At the time of its closing, it was the longest running musical in Broadway history. In 2013, Les Miserable was turned into a major motion picture, quickly becoming the largest grossing musical motion picture at the time of its opening.

For tickets or other information, call the PCT Box Office at 760-323-5123 or order online at PalmCanyonTheatre.org. Palm Canyon Theatre is located at 538 North Palm Canyon Drive, at the corner of Alejo Road. Box Office hours are Tuesday-Saturday, 10 a.m.-4 p.m.