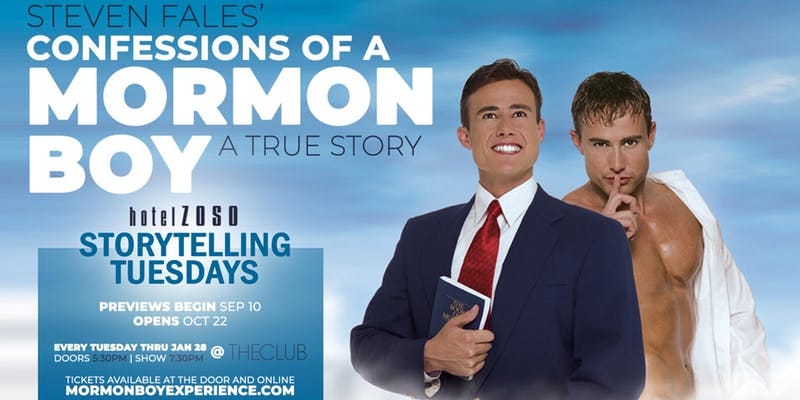 The NEW “Confessions of a Mormon Boy”​ now in residence for Storytelling Tuesdays at The Club at Hotel Zoso in downtown Palm Springs Sept 10 thru Jan 28, 2020. Tickets on sale now at www.mormonboyexperience.com. Show 7:30PM. Doors 5:30PM (drinks/dinner available).

“A thrilling theatrical experience. Bravo!”–Lucie Arnaz; “As moving as it is funny!”–New York Daily News; “A knock-it-out-of-the-ballpark performance!”–Judith Light; “Makes you want to jump up and holler, ‘Amen’!”–Leslie Jordan; “Fales knows how to sell it!”–New York Times

Experience “MORMON Boy” for yourself as award-winning storyteller Steven Fales comes to Palm Springs with his international one-man sensation CONFESSIONS OF A MORMON BOY now in residence for “Storytelling Tuesdays” at The Club at Hotel Zoso. TUESDAYS ONLY!

Anyone who has ever felt like an outcast in any way will love this show told with humor, song and unflinching honesty. CONFESSIONS OF A MORMON BOY is the inspiring true story of Steven Fales’ journey from being a devoted, sixth-generation Mormon, former missionary, and father of two to coming out as gay after trying conversion therapy and being excommunicated from the church of his birth. Riding an emotional roller coaster of extremes – from perfect Mormon boy in Utah to perfect rent boy in Manhattan – Fales discovers what it means to finally come home, if only in your heart. Runs approximately 90-minutes without intermission.

The production, which was first premiered in Salt Lake City, has since been seen across the USA, Australia, Canada, Scandinavia, Europe, and South Africa. Steven Fales received the Overall Excellence Award for Solo Show at the New York International Fringe Festival and was nominated for the Oscar Wilde Award for Outstanding New Writing for the Theatre at the International Dublin Gay Theatre Festival. Fales was also nominated for an Outer Critics Circle Award for Outstanding Solo Performance for his Off-Broadway performance which ran for 81 performances at the SoHo Playhouse.