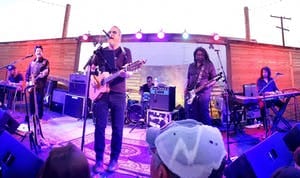 Cracker Performs at Pappy and Harriet’s in Pioneertown

Bummed Campout is Over?..Fear Not!
They’re Baaaaaaaack!
***Please note: THIS IS A NON SEATED SHOW
Tickets are GENERAL ADMISSION and NON REFUNDABLE
STANDING ROOM ONLY – INSIDE SHOW***

Cracker, the group that veritably introduced brash irreverence and irony into alt-rock, are back and in top form on their 429 Records debut, Sunrise In The Land Of Milk And Honey.

This rich new trove of sharp-witted songs showcases a bristling, late 70’s – early 80’s power pop punk aesthetic which hits as hard as it did at the band’s formation 17 years ago. Eight albums (one platinum and three gold) and a barrel full of anthemic hit songs later, Cracker endures, using their ability to weave decades of influences into an album that is seamlessly riveting.

In Sunrise…, long-time partners David Lowery and Johnny Hickman, 12-year Cracker drummer Frank Funaro and bassist Sal Maida (since 2006), train a watchful eye on the current socio-musical landscape as they weave an eerie yet strangely soothing story of escapism, apocalypse and renewal. Friends John Doe, Patterson Hood and Adam Duritz (whose mega-band Counting Crows was once produced by Lowery) make spirited guest appearances. The recording was helmed by Athens, GA-based producer/engineer David Barbe, a longtime friend of Lowery who has manned consoles for the likes of Son Volt and the alt-Southern rock band Drive-By Truckers.