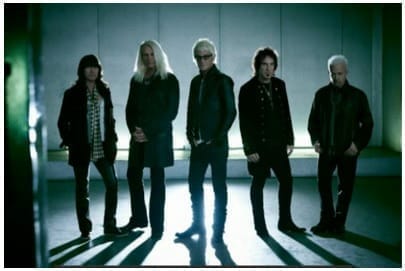 Formed in 1967, signed in 1971, and fronted by iconic vocalist Kevin Cronin since 1972, REO Speedwagon’s unrelenting drive, as well as non-stop touring and recording jump-started the burgeoning rock movement in the Midwest. Platinum albums and radio staples soon followed, setting the stage for the release of the band’s explosive HI INFIDELITY in 1980, which contained the massive hit singles “Keep On Loving You” and “Take It On the Run.” That landmark album spent 15 weeks in the No. 1 slot and has since earned the RIAA’s coveted 10X Diamond Award for surpassing sales of 10 million units in the United States.

From 1977 to 1989, REO Speedwagon released nine consecutive albums all certified Platinum or higher. Today, REO Speedwagon has sold more than 40 million albums around the globe, and Cronin and bandmates Bruce Hall (bass), Neal Doughty (keyboards), Dave Amato (guitar), and Bryan Hitt (drums) are still electrifying audiences worldwide in concert with hits and fan-favorites such as “Ridin’ The Storm Out,” “Can’t Fight This Feeling,” “Time For Me To Fly,” “Roll With The Changes,” “Keep On Loving You,” “Take It On the Run,” and many, many more.

REO Speedwagon remained busy throughout the pandemic before the band was able to return to the road. Beginning in April 2020, Cronin began a series of webisodes from his home titled “Songs & Stories From Camp Cronin.” Consisting of anecdotes and acoustic performances from him and his family, the series posted 24 episodes. Cronin and members of REO gave back over the past 16 months by participating in charity events for St. Jude Children’s Hospital, Marilou & Mark Hamill’s USC McMorrow Neighborhood Academic Initiative, John Oates’ “Oates Song Fest,” “Stars to the Rescue,” Acoustic-4-A-Cure, and more. Additionally, while Cronin began keeping a journal of the band’s 2016 UK tour, he never stopped writing and recently submitted what turned out to be his life story, as well as his telling of REO Speedwagon’s history. He says, “Putting out an autobiography is risky. Once it’s out there’s nowhere to hide!” More information on his autobiography will be released shortly.