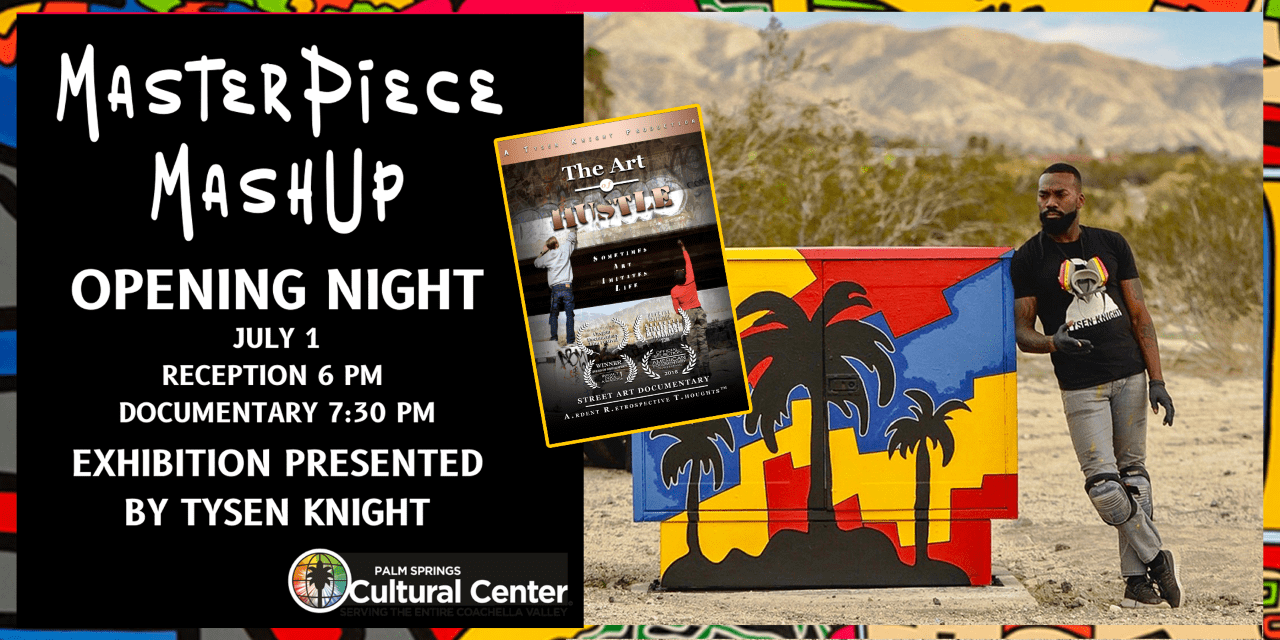 Pop urban artist Tysen Knight’s latest exhibition, “MasterPiece MashUp,” opens July 1 at the Palm Springs Cultural Center (PSCC). The exhibition, which runs in the VIP lounge upstairs from July 1 to August 5, includes Knight’s latest collection of paintings and drawings where he re-imagines paintings by artists such as Pablo Picasso, Leonardo Da Vinci and Grant Wood. Knight is popularly known for his street art inspired by the works of famous street artists, such as Jean-Michel Basquiat and Keith Haring, and reflects the styles of Pablo Picasso and Andy Warhol. The PSCC is located at 2300 E. Baristo Rd in Palm Springs, across from the Palm Springs High School.

In 2016, Knight began producing the documentary “The Art of Hustle: Street Art Documentary,” which follows Knight’s growth in the culture of street art. He directed the documentary to deliver an inspirational story about the dedication required to achieve goals while shedding a positive light on street art. The documentary won the “Best Feature Film” award at the 2018 Oregon Documentary Film Festival. His second documentary, “The Art of Hustle: Homeless Street Artist,” follows three homeless artists as they create art to survive and won the “Best Director” award at the 2019 Marina Del Rey Film Festival.

“The Art of Hustle: Street Art Documentary” will be screened at the opening night reception on July 1. The reception will begin at 6 p.m. with passed hors-d’oeuvres, followed by the film screening at 7:30 p.m. Tickets can be reserved at bit.ly/TysenKnightOpening.

“The Art of Hustle: Homeless Street Artist” will be screened at the closing night reception on August 5. The reception will begin at 6 p.m., followed by the film screening at 7 p.m. Tickets can be reserved at bit.ly/TysenKnightClosing.