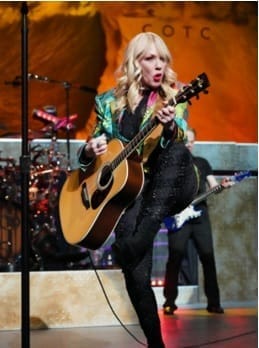 Wilson is celebrated as a seminal musician in rock ‘n’ roll history. A guitar virtuoso from the age of 9, Nancy leads the multi-platinum rock group, Heart, who have sold upwards of 35 million albums. Nancy is revered as an ingenious guitar player, and as a gifted lead vocalist. In fact, that’s Nancy singing on Heart’s first No. 1 hit, “These Dreams.” As a songwriter, Nancy has co-written a collection of indelible songs that have earned their way into the classic rock canon (“Magic Man,” “Crazy on You,” “Barracuda,” “Straight On”). Nancy and Ann were honored with the ASCAP Founders Award (2009), ASCAP’s most prestigious honor, awarded to songwriters who have made pioneering contributions to music.

During an era when females in rock ‘n’ roll were scarce, Nancy helped to carve out a place for women to front rock bands and dominate on stage. Her icon status was cemented when Heart was inducted into the Rock ‘n’ Roll Hall of Fame in 2012. That same year, she and her sister received a star on the Walk of Fame in Hollywood. In 2013, the Wilson Sisters celebrated another career milestone when they performed Led Zeppelin’s “Stairway To Heaven” at the Kennedy Center Honors. Their note-perfect performance was met with rousing cheers and a standing ovation in the staid concert hall and brought members of Led Zeppelin to tears. The video went viral on YouTube.

In 2020, Nancy turned her attention to recording the first solo album of her storied career and signed with global label partner Carry On Music. Nancy plays guitar and sings on all the songs on the entire album, which includes 9 new, original songs. The first single from the album is Nancy’s stunning rendition of Bruce Springsteen’s “The Rising.”