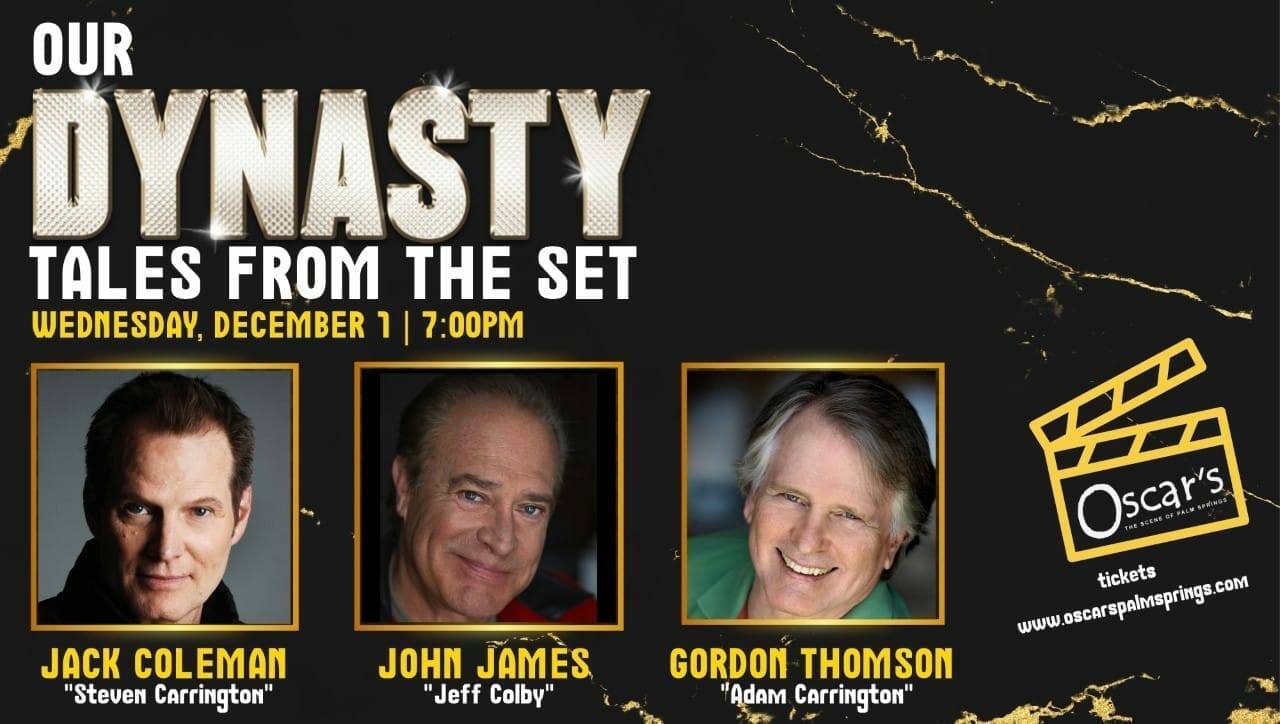 “Our Dynasty: Tales From The Set” Premiering at Oscar’s in Palm Springs

“Our Dynasty: Tales From The Set”

Premiering at Oscar’s in Palm Springs on Wednesday, December 1, 2021

Original Dynasty stars Jack Coleman (Steven Carrington), John James (Jeff Colby) and Gordon Thomson (Adam Carrington) are co-starring once again in the premiere of their new live stage show “Our Dynasty:Tales From the Set” in Palm Springs at Oscar’s Café on Dec. 1 at 7 p.m.

The three men of Dynasty, the Aaron Spelling/ABC television series that defined the 1980s, will reunite on stage for an intimate evening of laughs and conversation, with never before told backstage stories, interaction with the audience, and musical surprises.

In the 1980s, Dynasty gave the world a decade of big hair, big shoulder pads, and even bigger catfights. At the height of its’ success, ABC’s Dynasty was the No. 1 TV show in the US and played to a worldwide audience of over 60 million fans weekly. Marking the 40th anniversary, Forbes Magazine called the show, “a truly great escape!” The stars of “Our Dynasty:Tales from the Set” take the audience on a journey back to the 1980’s reminiscing about all the fan favorite storylines and the behind-the-scenes accounts of working with their iconic co-stars and guest stars like Rock Hudson and others.

A familiar face on television, Jack Coleman, has also been seen as Noah Bennet (aka The Man with Horn-Rimmed Glasses) on Heroes for four seasons, as State Senator Robert Lipton on The Office, and as U.S. Senator William Bracken on Castle. Jack has also had recurring roles on USA’s Burn Notice, CW’s The Vampire Diaries, and ABC’s Scandal. Currently, Jack can be seen on NBC’s new series, Ordinary Joe.

Golden Globe Nominee John James also starred in the Dynasty spin-off The Colbys and as Jeff Martin on All My Children. An accomplished stage actor, John has been seen in musical comedies in theatres around the country. He also starred in the national tour of the classic thriller Dial M For Murder with the legendary Roddy McDowell. John was a staple of 1980s television, also appearing in other Aaron Spelling classics like Fantasy Island and The Love Boat.

Golden Globe nominee Gordon Thomson was cast in the juiciest male role on Dynasty as the scheming Adam Carrington opposite Joan Collins as his mother Alexis. A role that was to have lasted for only six episodes turned in to one of TV’s most iconic villains for seven seasons. In his native Canada, Gordon was an accomplished Shakespearean actor. He was also part of the original Toronto cast of the ever-popular musical Godspell. Gordon starred in the classic NBC television soaps Santa Barbara and on Sunset Beach for Dynasty producer Aaron Spelling.

“Our Dynasty:Tales from the Set” will have its world premiere in Palm Springs prior to a national tour in the US commencing in 2022. The show is produced by Mark Rozzano (Disney’s Beauty and the Beast) and Andrew Scott.