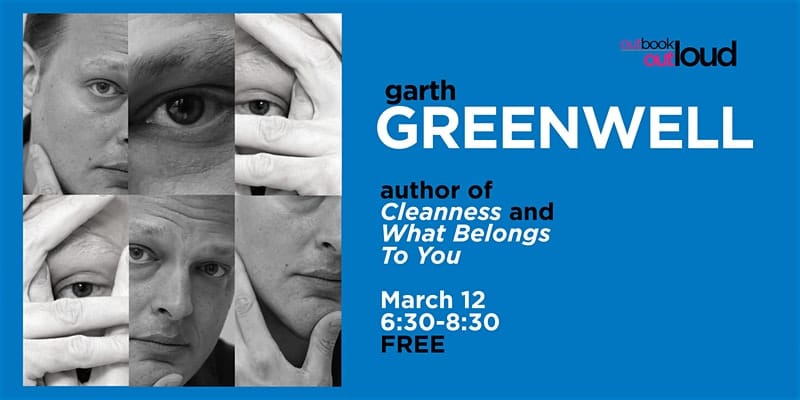 Garth Greenwell will be appearing March 12, 2020 at the Palm Springs Cultural Center speaking on his latest book CLEANNESS named a Most Anticipated Book of 2020 by The New York Times, The Guardian, The Washington Post, The Wall Street Journal and more!

The talk begins at 6:30 pm and will run to 7:30 pm with a book signing and reception to follow.

In the highly anticipated follow-up to his beloved debut, What Belongs to You, Garth Greenwell deepens his exploration of foreignness, obligation, and desire

In this atmosphere of disquiet, an American teacher navigates a life transformed by the discovery and loss of love. As he prepares to leave the place he’s come to call home, he grapples with the intimate encounters that have marked his years abroad, each bearing uncanny reminders of his past. A queer student’s confession recalls his own first love, a stranger’s seduction devolves into paternal sadism, and a romance with another foreigner opens, and heals, old wounds. Each echo reveals startling insights about what it means to seek connection: with those we love, with the places we inhabit, and with our own fugitive selves.

“An electrifying portrait of sex’s power to lacerate and liberate, to make and unmake our deepest selves … The book’s sex scenes unfold like revelations, effortlessly braiding inner drama with precisely choreographed intimacy. Greenwell’s long, luxuriously becomma’d sentences, always on the edge of ending, create a tension receptive to the lightest touch: a shift in rhythm, or one clause’s tiny revision of its predecessor, can entirely alter the chemistry of a scene. He melds an incantatory cadence with the catechistic language of porn, which is ridiculous until you’re ‘lit up with a longing that makes it the most beautiful language in the world.’ … Intimately powerful.” — Julian Lucas, Harper’s

Garth Greenwell is the author of What Belongs to You, which won the British Book Award for Debut of the Year, was longlisted for the National Book Award, and was a finalist for six other awards, including the PEN/Faulkner Award, the James Tait Black Memorial Prize, and the Los Angeles Times Book Prize. A New York Times Book Review Editors’ Choice, it was named a Best Book of 2016 by over fifty publications in nine countries, and is being translated into a dozen languages. A new book of fiction, Cleanness, is forthcoming from FSG in early 2020. His fiction has appeared in The New Yorker, The Paris Review, A Public Space, and VICE, and he has written criticism for The New Yorker, the London Review of Books, and the New York Times Book Review, among others. He lives in Iowa City.