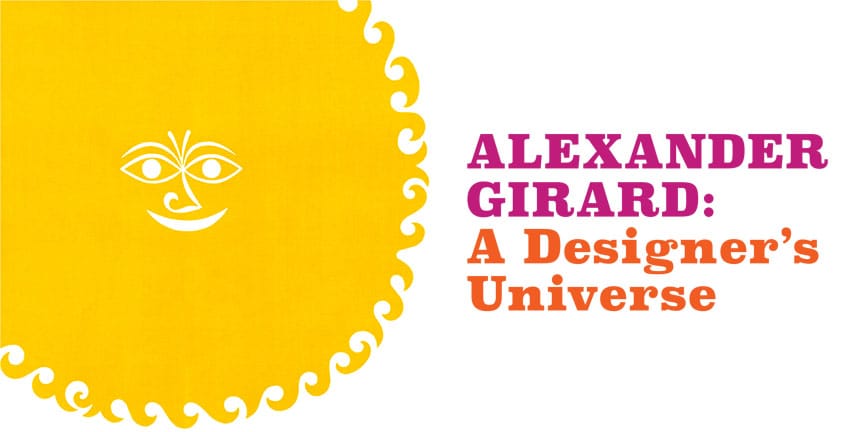 Palm Springs Art Museum is pleased to announce the West Coast debut of Alexander Girard: A Designer’s Universe. This exhibition, curated by Jochen Eisenbrand and organized by Vitra Design Museum, presents the vibrant world of Girard through more than 700 objects: textiles, drawings, furniture, graphics, film, and folk art. The show will be on view from November 23, 2019 through March 1, 2020.

One of the most important and influential designers of the 20th century, Alexander Girard created stunning interiors for restaurants, private homes, corporate offices, and even airplanes. He designed textiles, typography, tableware, toys, and a whole city street in Columbus, Indiana. Inspired by folk art and pop art, Girard created a bold, colorful, and charismatic universe. “He warmed up modernism with his whimsical, optimistic patterns and designs,” says Brooke Hodge, Director of Architecture and Design at Palm Springs Art Museum, “and we are thrilled to bring this important modern master’s work to Palm Springs especially since its presentation is timed to coincide with Modernism Week 2020.”

A Designer’s Universe will allow visitors to experience one of Girard’s best-known interiors—that of the 1957 Miller House in Columbus, Indiana—through a full-scale replica of its iconic sunken living room, which will function as gallery seating as well as a space for public programs.

“This exhibition is sure to be extremely well received in Palm Springs and by presenting it at our flagship location, we are signaling the importance of architecture and design to the museum’s mission,” says Louis Grachos, JoAnn McGrath Executive Director/CEO. “In fact, Alexander Girard is the linchpin in our Year of Design that includes exhibitions by Barbara Solomon and Jim Isermann.”

Practicing from the late 1920s until the late 1970s, Girard worked mostly for the American furniture company Herman Miller after becoming director of its textile division in 1951. Girard’s clients also included companies like Braniff International Airways and John Deere for which he created fresh new corporate brand identities, which, in the case of Braniff, extended from the planes themselves to the flight crew uniforms and passenger lounges. In addition to Girard’s own designs, this exhibition presents the creative universe from which Girard took his inspiration: folk art from all over the world, which the designer collected throughout his life. A selection of 300 objects from his folk art collection, gifted by him to the International Folk Art Museum in Santa Fe, is also featured in the exhibition.

A variety of educational programs and activities will take place in connection to the Palm Springs iteration; additionally, the museum’s annual gala and biggest fundraiser on January 26, 2020 will be Girard themed in décor and ambience to bring even greater attention to the exhibition. Alexander Girard: A Designer’s Universe’s global sponsors are Herman Miller and Maharam. Palm Springs Art Museum’s presentation is organized by Brooke Hodge, Director of Architecture and Design.

Media images and caption sheet can be accessed here.