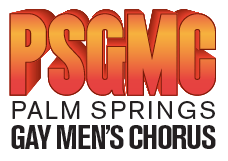 This year’s auditions brought in 27 new singers in one of the most diverse and talented freshman classes in the Chorus’ 23-year history. Along with many seasoned members, the 80+ singers will sparkle, put a smile on your face, illuminate the season and leave you wanting more while singing the shows iconic songs.

Soria-Foust has assembled a program filled with traditional selections like “Oh, Holy Night” and non-traditional “We Are Lights” (The Chanukah Song) by Stephen Schwartz and “Christmas in Palm Springs.” As audiences have come to expect, there will be a few surprises, songs in four languages and heartfelt musical moments that only Palm Springs’ official gay men’s chorus can provide. The program also includes “Glow,” by Eric Whitacre, “Pure Imagination,” from Willy Wonka and “Sparklejollytwinklejingley” from Elf the Musical. Two of PSGMC’s most valuable talents are Joel Baker as Principal Accompanist and Martin Coogan, who provides ASL.

This year, the Chorus welcomes Broadway star Michele McConnell from Andrew Lloyd Weber’s The Phantom of the Opera. Michele proudly made her Broadway debut in The Phantom of the Opera. During her 7-1/2 years in Phantom, Michele had the privileged distinction to be the longest-running Carlotta in Broadway history, with over 2200 performances in the role to her credit and to perform as Carlotta for the 10,000th Broadway show as well as the 25th Anniversary performance.

Michele’s other credits include: My Fair Lady in Concert with The Utah Symphony, The Music Man in Concert with The Pacific Symphony, Festival of Carols Guest Soloist with the Indianapolis Symphonic Choir & Chamber Orchestra, Camelot (Natl. Tour w/Robert Goulet), Beauty and the Beast (Montreal/Las Vegas), San Diego Comic Opera and San Diego Repertory. Michele has traveled to over 115 countries performing on luxury cruise ships with her husband, baritone Duane McDevitt and they have released a CD release titled “Believe.”
In addition to her performance credits, Michele has an extensive master class and workshop resume. She has taught with the Joffrey Ballet Summer Musical Theatre Intensive since it’s inception in 2015. Other notable workshop credits include: Manhattan School of Music, Bucknell University, Berklee School of Music, Mira Costa High School, and Butler University. Michele is a proud first-generation Austrian-American, a proud member of Actor’s Equity Association, and a proud Mary Kay Independent Beauty Consultant earning TWO free Mary Kay cars!

Jerry R. Soria-Foust joins the Palm Springs Gay Men’s Chorus as a professional music educator and arts leader, with a career spanning more than 25 years. At the age of 19, Jerry had his first GALA choruses experience, performing in the inaugural season of the Indianapolis Men’s Chorus. That experience was transformational, and he credits participation in a number of GALA organizations for the fulfilling life he leads as a teacher, leader, artist, husband, dad and grandpa.

From 2005-2009, Jerry served as Artistic Director for the San Diego Men’s Chorus, where he led the chorus through a number of milestones, including performing as main stage entertainment on an ocean liner for RSVP cruises, singing the national anthem for the San Diego Padres, and becoming the resident choral ensemble in the newly renovated Balboa Theatre in downtown San Diego. To READ MORE CLICK HERE!

PSGMC is a chorus of gay men, transgender, bisexual and male identifying singers who through musical excellence, community outreach, and civic responsibility, are dedicated to entertaining, inspiring, and educating the culturally diverse community in which we live.

For a variety of ways to support the Palm Springs Gay Men’s Chorus, visit www.PSGMC.com. Press inquiries should be directed to Jeff Hocker, Hocker Productions at 760-409-1530 or jeffhocker1@gmail.com.