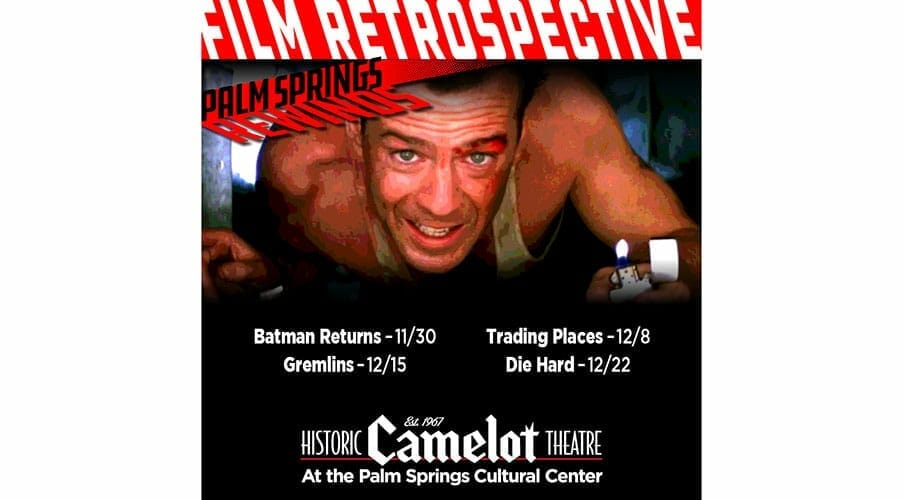 It may not technically be a Christmas movie – but it is one this year, and it’s playing on the big screen at the Palm Springs Cultural Center’s Historic Camelot Theatre this holiday season! The popular film retrospective series, Palm Springs Rewinds, will close out the year with a collection of non traditional Christmas movies that offer plenty of murder and mayhem to spice up your holidays.

November 30 – Batman Returns (1992)
The monstrous Penguin (Danny DeVito), who lives in the sewers beneath Gotham, joins up with wicked shock-headed businessman Max Shreck (Christopher Walken) to topple the Batman (Michael Keaton) once and for all. But when Shreck’s timid assistant, Selina Kyle (Michelle Pfeiffer), finds out, and Shreck tries to kill her, she is transformed into the sexy Catwoman. She teams up with the Penguin and Shreck to destroy Batman, but sparks fly unexpectedly when she confronts the caped crusader.

December 8 – Trading Places (1983)
Upper-crust executive Louis Winthorpe III (Dan Aykroyd) and down-and-out hustler Billy Ray Valentine (Eddie Murphy) are the subjects of a bet by successful brokers Mortimer (Don Ameche) and Randolph Duke (Ralph Bellamy). An employee of the Dukes, Winthorpe is framed by the brothers for a crime he didn’t commit, with the siblings then installing the street-smart Valentine in his position. When Winthorpe and Valentine uncover the scheme, they set out to turn the tables on the Dukes.

December 15 – Gremlins (1984)
A young boy (Zach Gilligan) receives a new “pet” for Christmas called a Mogwai. In order to take care of the furry creature, he must follow three very important rules: Never expose it to bright light (which will kill it), never get it wet (which will make it multiply) and never, ever feed it after midnight. When the rules are unintentionally broken, it unleashes many of the mischievous monsters across the town.

December 22 – Die Hard (1988)
New York City policeman John McClane (Bruce Willis) is visiting his estranged wife (Bonnie Bedelia) and two daughters on Christmas Eve. He joins her at a holiday party in the headquarters of the Japanese-owned business she works for. But the festivities are interrupted by a group of terrorists who take over the exclusive high-rise, and everyone in it. Very soon McClane realizes that there’s no one to save the hostages — but him.