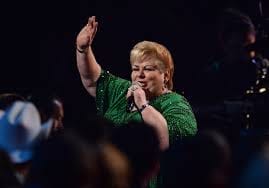 Paquita la del Barrio (“Paquita from the hood”) is a Grammy-nominated Mexican singer, songwriter, and actress who performs in the rancheras and other Mexican genres. She started her career in Mexico City in 1970 performing at a local restaurant. She quickly developed an avid following and soon performed on a Televisa show, which increased her popularity. Her songs usually take a stance against Mexico’s sexist male culture, making her very popular with female audiences.

Her album “Romeo Y Su Nieta” earned her a nomination for the 56th Annual Grammy Awards in 2013 under Best Regional Mexican Music Album (Including Tejano). She was honored with the lifetime achievement prize at the 2016 Premio lo Nuestro awards. She has inspired a television series on Univision. The series, “Paquita la del Barrio,” follows the fictional life story behind the Mexican singer. Paquita stated that it was difficult to watch a story of her life, but was pleased that her story was being told.

She is known for interpreting ranchero songs with suggestive titles, which have been classified in the genre “hard and against them” because they are directed at men.