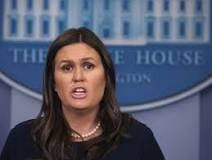 Mama’s House, the only residential home within the Coachella Valley providing shelter for women in crisis pregnancies, has announced plans for the organization’s Seventh Annual HEARTbeat of Love Luncheon. This highly-anticipated event will take place on Saturday, February 8, 2020, at Indian Wells Renaissance Resort and Spa, located at 44400 Indian Wells Lane, in Indian Wells, California. The event will commence at 11:00 a.m. and will conclude at 1:30 p.m.

“We are delighted to announce that Former White House Press Secretary, Saral1 Huckabee Sanders, will be the featured speaker at this year’s event,” stated Jan Lupia, Founder and Executive Director of Mama’s House. “We are anticipating a sold-out event once again this year, with approximately 1,100 guests in attendance. Sarah Huckabee Sanders is only the third woman and very first Mom to hold the job of White House Press Secretary. We look forward to hearing about her unique, challenging, and inspiring experiences in the White House, in addition to her perspective on some of the great events of our recent history. It is very gracious of her to come and lend her support to the work of Mama’s House.”

On Friday night, February 7, 2020 from 5:00 to 7:00 p.m., Mama’s House will host a private VIP Reception and Dinner with Sarah Huckabee Sanders and major donors. These separate events are held at a special location within the Coachella Valley.

Sarah Huckabee Sanders served as White House Press Secretary for President Donald J. Trump from 2017 to 2019. A trusted confidante of the President, Sarah advised him on everything from press and communications strategy to personnel and policy issues. For two and a half years, Sanders was at the President’s side, handling the media, working with lawmakers and CEOs, and staffing the President on every foreign trip, including meetings with many foreign leaders. President Trump described Sarah as irreplaceable, a warrior, and a very special person with extraordinary talents, who has done an incredible job.” Sanders joined the Trump campaign as a Senior Advisor during the primary, and she continued that role through President Trump’s victory. She has worked in many leadership roles in the past, having worked for U.S. Senators and Governors, as well as on Presidential campaigns. She has also advised major FORTUNE 500 companies and nonprofits to take action to end extreme poverty and preventable disease, particularly in Africa. In 2007 and 2008, Sanders helped lead her father, former Arkansas Governor Mike Huckabee, to victory in the Iowa Caucuses and in seven other states. As his National Political Director, Sarah has been named one of TIME Magazine’s “40 Under 40,” and has been recognized as one of the best political operatives of her generation.

Sponsorships are immediately available. All include some admissions to the VIP reception on Friday, February 7, 2020 with a limited number including the VIP Dinner with Sarah Huckabee Sanders.

Sponsorships range from $750 all the way up to $60,000 for a Premier Sponsorship. Individual Luncheon tickets are priced at $125 and will be on sale beginning October 14. For Sponsorship information please contact Jan Lupia directly at 760-406-3413 or 844-232-8622 ext. 1 or email her at janlupia@themamashouse.org

ABOUT MAMA’S HOUSE
On July 27, 2013, Mama’s House opened its doors to its first resident Mama’s House offers a safe, supportive, loving, and nurturing residential environment for women who are facing an unplanned pregnancy with no place to live and no means of support. Today, there are so many good things happening at Mama’s House, as this nonprofit celebrates its sixth anniversary year.

Over these years, Mama’s House has welcomed more than 200 residents and their babies. At Hope Center, the educational and counseling extension of Mama’s House, the organization offers additional services to the residents, their baby’s father’s and often their families, while also providing many of

these same services to tl1e community-at-large. These services include but are not limited to parenting, job and life skills, domestic violence and anger management classes, support groups for those wounded by abuse, addiction, abortion and more. Hope Center has partnered with the Coachella Valley Adult School to offer High School Diploma and GED programs.