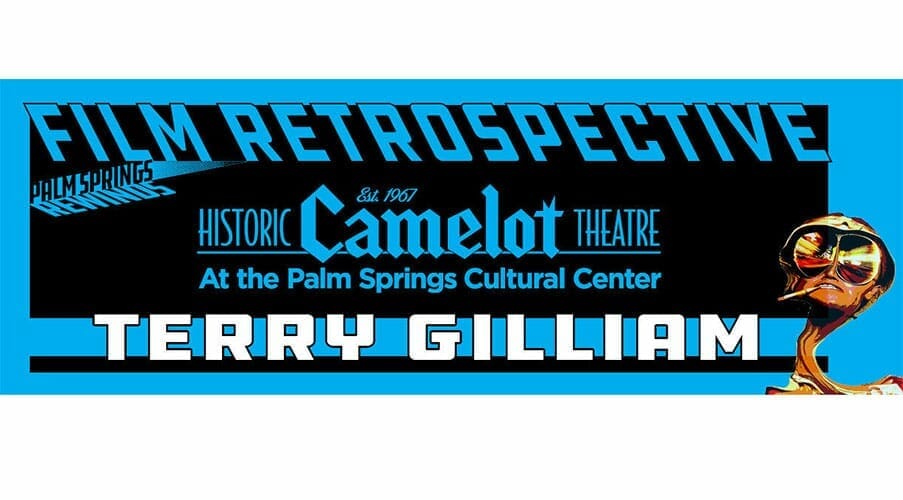 The Palm Springs Cultural Center is thrilled to announce that the next installment of its popular film retrospective series, Palm Springs Rewinds, will feature the definitive films of director Terry Gilliam.

The series will feature six of Terry Gilliam’s definitive films, kicking off with Monty Python and the Holy Grail on Thursday, February 2nd, and ending with Fear and Loathing in Las Vegas on Thursday, April 20th (4/20). Showtime is 7pm.

The Terry Gilliam Retrospective is sponsored by Off the Charts Dispensary and CV Independent. The Cultural Center’s Historic Camelot Theatre is highly regarded by film fans, boasting one of the largest screens in the Coachella Valley and a state-of-the-art sound system.

Feb 2 – Monty Python And The Holy Grail (1975)
A comedic send-up of the grim circumstances of the Middle Ages as told through the story of King Arthur and framed by a modern-day murder investigation. When the mythical king of the Britons leads his knights on a quest for the Holy Grail, they face a wide array of horrors, including a persistent Black Knight, a three-headed giant, a cadre of shrubbery-challenged knights, the perilous Castle Anthrax, a killer rabbit, a house of virgins, and a handful of rude Frenchmen.

Feb 16 – Time Bandits (1981)
Young history buff Kevin (Craig Warnock) can scarcely believe it when six dwarfs emerge from his closet one night. Former employees of the Supreme Being (Ralph Richardson), they’ve purloined a map charting all of the holes in the fabric of time and are using it to steal treasures from different historical eras. Taking Kevin with them, they variously drop in on Napoleon (Ian Holm), Robin Hood (John Cleese) and King Agamemnon (Sean Connery) before the Supreme Being catches up with them.

March 2 – Brazil (1985)
Low-level bureaucrat Sam Lowry (Jonathan Pryce) escapes the monotony of his day-to-day life through a recurring daydream of himself as a virtuous hero saving a beautiful damsel. Investigating a case that led to the wrongful arrest and eventual death of an innocent man instead of wanted terrorist Harry Tuttle (Robert De Niro), he meets the woman from his daydream (Kim Greist), and in trying to help her gets caught in a web of mistaken identities, mindless bureaucracy and lies

March 16 – The Adventures Of Baron Munchausen (1989)
During the “Age of Reason” of the late 18th century, the Turkish army lays siege to a European city where a theater production about the extraordinary heroics of famed German aristocrat Baron Münchhausen is underway. A man steps forward to object that the performance is full of inaccuracies, claiming that he is the real Baron Münchhausen (John Neville). When the Turkish army approaches with gunfire, the baron undertakes his latest adventure with his promise to defend the city.

April 6 – 12 Monkeys (1995)
Traveling back in time isn’t simple, as James Cole (Bruce Willis) learns the hard way. Imprisoned in the 2030s, James is recruited for a mission that will send him back to the 1990s. Once there, he’s supposed to gather information about a nascent plague that’s about to exterminate the vast majority of the world’s population. But, aside from the manic Jeffrey (Brad Pitt), he gets little in the way of cooperation, not least from medical gatekeepers like Dr. Kathryn Railly (Madeleine Stowe).

April 20 – Fear And Loathing In Las Vegas (1998)
Raoul Duke (Johnny Depp) and his attorney Dr. Gonzo (Benicio del Toro) drive a red convertible across the Mojave desert to Las Vegas with a suitcase full of drugs to cover a motorcycle race. As their consumption of drugs increases at an alarming rate, the stoned duo trash their hotel room and fear legal repercussions. Duke begins to drive back to L.A., but after an odd run-in with a cop (Gary Busey), he returns to Sin City and continues his wild drug binge.

Movies in the Park