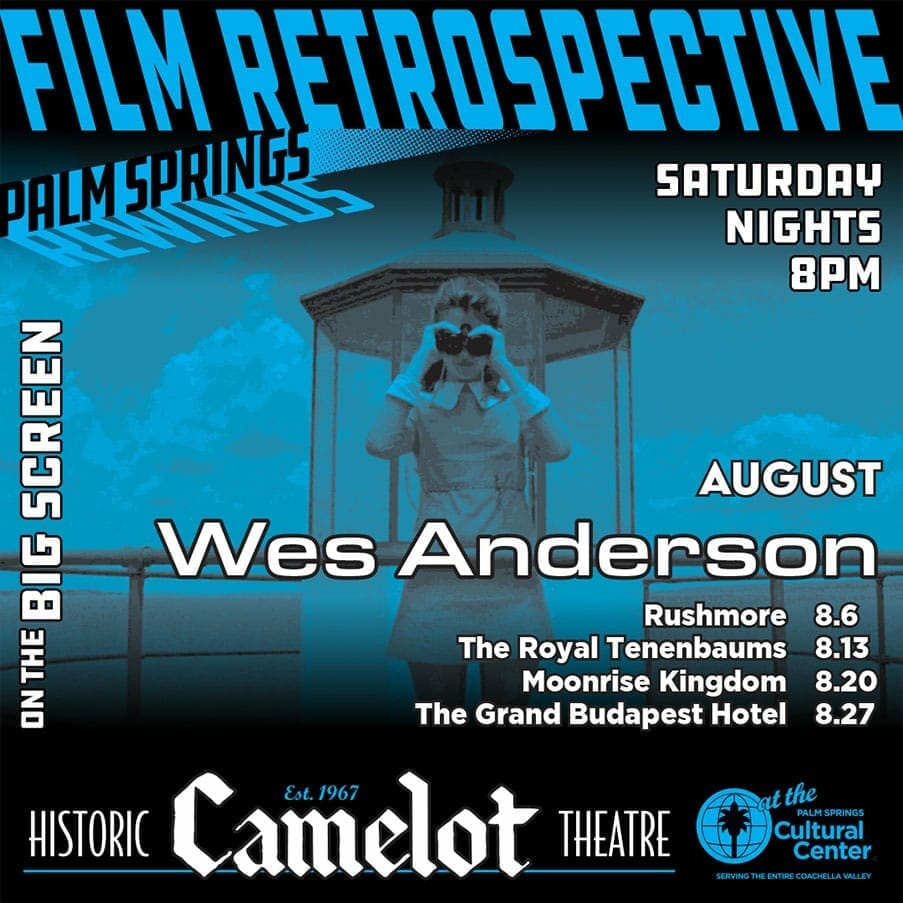 One of the most unique cinematic voices of his generation, Wes Anderson’s style of directing is both deliberate and complex. His films are also complex; detailed stories that are best known for their distinct visual style and eccentric yet poignant narratives. A Texas native, Anderson’s work has had an indelible influence on both the independent film scene and the culture at large.

A retrospective series featuring four of Wes Anderson’s definitive films will be screened at the Palm Springs Cultural Center inside their Historic Camelot Theatre on Saturday nights at 8pm throughout the month of August. The screenings are part of the Palm Springs Rewinds film retrospective series, an on-going retrospective featuring the must-see films of acclaimed contemporary directors. PS Rewinds featured the Coen brothers in June and Quentin Tarantino in July.

The August Wes Anderson retrospective is sponsored by Paul Bar, CV Independent, and Channel Q 103.1. The Cultural Center’s Historic Camelot Theatre is highly regarded by film fans, boasting one of the largest screens in the Coachella Valley and a state-of-the-art sound system.

Tickets and All Access Film Passes can be purchased HERE

8/6 – RUSHMORE (1998)
When a beautiful first-grade teacher (Olivia Williams) arrives at a prep school, she soon attracts the attention of an ambitious teenager named Max (Jason Schwartzman), who quickly falls in love with her. Max turns to the father (Bill Murray) of two of his schoolmates for advice on how to woo the teacher. However, the situation soon gets complicated when Max’s new friend becomes involved with her, setting the two pals against one another in a war for her attention.

8/13- THE ROYAL TENENBAUMS (2001)
The Tenenbaums are a family split apart by the actions of the family head, Royal Tenenbaum. When Royal’s estranged wife is engaged to a new man twenty two years after their separation, Royal Tenenbaum (Gene Hackman) sets forth a devious plot to win Etheline (Anjelica Huston) and his family back: By pretending to be dying. Starring Gwyneth Paltrow, Ben Stiller, Danny Glover, Luke Wilson, Owen Wilson, and Bill Murray.

8/20- MOONRISE KINGDOM
The year is 1965, and the residents of New Penzance, an island off the coast of New England, inhabit a community that seems untouched by some of the bad things going on in the rest of the world. Twelve-year-olds Sam (Jared Gilman) and Suzy (Kara Hayward) have fallen in love and decide to run away. But a violent storm is approaching the island, forcing a group of quirky adults (Bruce Willis, Edward Norton, Bill Murray) to mobilize a search party and find the youths before calamity strikes.

8/27- THE GRAND BUDAPEST HOTEL
In the 1930s, the Grand Budapest Hotel is a popular European ski resort, presided over by concierge Gustave H. (Ralph Fiennes). Zero, a junior lobby boy, becomes Gustave’s friend and protege. Gustave prides himself on providing first-class service to the hotel’s guests, including satisfying the sexual needs of the many elderly women who stay there. When one of Gustave’s lovers dies mysteriously, Gustave finds himself the recipient of a priceless painting and the chief suspect in her murder.

The Palm Springs Cultural Center incubates, produces and encourages arts and cultural programs in order to leverage the unique power of creativity to open minds, bridge what divides people, and discover what connects people. Its programs include film festivals, farmers’ markets, live performances, art installations and lecture series—all of which act as creative inspiration points—expanding learning and building meaningful relationships with people and the environment. As an organization, The Palm Springs Cultural Center is also at the forefront of recognizing the interconnection between the cultural arts and food culture, and their combined importance to the vitality, collective consciousness and sustainability of the community.