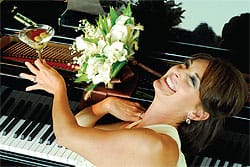 Toward the end of my first year in college, a couple who lived in my dorm got engaged. All the girls gathered around to “ooh” and “aah” over the ring, a beautiful (albeit tiny) diamond. My friend, Candy, and I joined in enviously. We could only dream of such commitment from our boyfriends.

“If I had a ring like that, I’d never be able to concentrate in class,” I declared, only half-kidding. “I’d spend all day staring at it and planning my wedding!”

“I know,” Candy gushed in agreement. “Won’t it be great to be engaged someday? To have a fiancé?”

Back then, when I was 18, getting married was all about dreamy details, like having a personal stake in the word “fiancé” and wearing a big rock of a ring that would announce: “I’m engaged!” Reality didn’t live up to my romantic fantasies, however, when my boyfriend proposed a few years later. The top-heavy ring never sat quite right and twisted awkwardly around my finger, nagging me to confront my confusion. Why did this feel so off? I kept knocking the diamond into things and finally chipped the edge, then worried obsessively that I’d do it again. I’d marred the gem, and it seemed all too symbolic of our flawed relationship, which would eventually end in divorce.

Four years later, I met Philip — cute, smart, fun, motivated. Here was a guy I could talk to, be myself with; here was a guy I could trust and respect forever. When we started talking marriage, I was happy and excited, but a little wary, too. My former spouse had treated commitment like a joke; this time, I wasn’t kidding around. Getting married was serious business and I was going to approach it that way. I’d had it with romantic notions. At 33, I just couldn’t see adding a frivolous trinket like a diamond engagement ring into the mix.

“Maybe a ruby or some other gem would be ok,” I conceded. “But really, this isn’t about the diamond.” Eventually I made up my mind: “Let’s just skip it.”

So for months before Philip and I got married, I didn’t wear a ring. And it didn’t feel like anything was missing. That probably had something to do with the fact that we never got “officially” engaged. (The last thing I wanted was a surprise proposal that might sweep me off my feet. This time I was grounded.) We just moved forward — from dating to discussing marriage to buying a house and planning our wedding. For a while, it felt like the house was my engagement ring, and that seemed right to me. After all, I thought, a house is a smart, grown-up investment for the whole family. You can live in a house, spend your marriage there, and someday, raise your children inside those walls.

But it was just around the time that we moved in that my feelings about an engagement ring began to change. Philip and I had been together for two years, and our wedding was only a few weeks away. I wasn’t feeling weighed down by my past anymore. I was feeling hopeful, looking forward to the future. I found myself flipping through bridal magazines at work, selecting ring styles I liked best. Gold or platinum? Princess or emerald cut? Each one seemed to represent a different kind of bride. A diamond ring wasn’t a frivolous trinket, I started to realize. It could be a meaningful symbol of the most important event of my life. Suddenly, I couldn’t believe I’d said I didn’t want one! I wondered if it was too late to change my mind.

I’d thought Philip agreed with my argument that diamond rings were a waste of money. But he didn’t mention it when I raised the subject with a new angle, showing him my favorite designs, observing that only a diamond — not a ruby, not an opal — would be recognized as a symbol related to marriage. As I spoke, I realized at the core that I was still the same romantic optimist I’d been at 18. I was no longer afraid to admit that I felt good in this relationship: happy and safe and secure. Now I wanted a ring that would proclaim my status to the world: “I’m in love and I’m taken!” I knew just what it should look like, exactly how it should feel. We’d made all of our other decisions — about our relationship, our house, our wedding — together. “Why should this be any different?” I thought.

Shopping for my ring together meant no guessing games, no surprises — except when I happily held my breath as Philip told the sales clerk he’d take the better (and more expensive) of the two gems she presented. A week before the wedding, I had the ring I wanted: a princess-cut diamond flanked by two smaller diamonds and set in a white gold band.

There it is now — so comfortable, it feels like a natural part of my finger, so sparkly and beautiful that I could gaze at it all day long. Sometimes I do, just to remind myself: A happy marriage is a dream. But it can also be a reality. And that’s a pretty solid reason to wear a diamond ring.