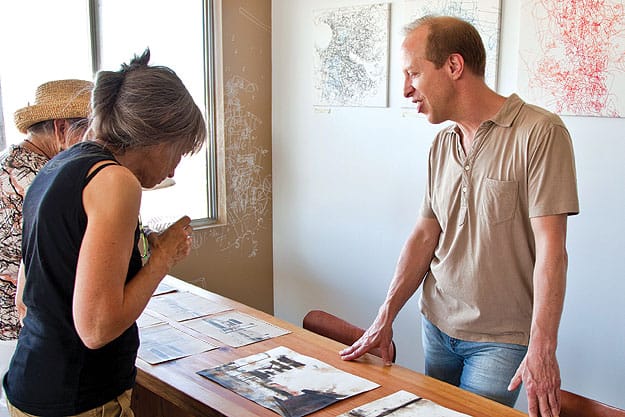 As a successful investment banker and brand strategist, Bernard Leibov felt something was missing from his life. “I was not taken with the intangible results of my profession,” he says. “I need to be in direct contact with what I’m affecting.”

Leibov, who once launched a dance company with a friend from college, enjoys making things happen in the arts. So he began mounting exhibitions of Joshua Tree artists in his New York apartment. And now he hosts artists for residencies in the High Desert community.

Leibov immigrated to the United States to attend high school in 1978 during a period of unrest in his native South Africa. He graduated from The Wharton School at University of Pennsylvania and worked on Wall Street for eight years before working as a brand strategist.

Leibov had visited Joshua Tree in 2005 to see High Desert Test Sites, a program of site-specific installations on the landscape organized by artist Andrea Zittel.

He was so inspired that he returned for regular visits. In 2007, Leibov applied for the position of deputy director of the Judd Foundation, whose mission is to preserve the living and working spaces of minimalist artist Donald Judd in Marfa, Texas. Lacking nonprofit or arts experience, Leibov did not get the job. Nevertheless, he was determined to make a change and moved to Joshua Tree in early 2008 to create art.

He returned to New York City when offered the managing director position at a design firm, a post that did not survive the financial crisis of 2008. He had also decided to mount exhibitions in his apartment of works by Joshua Tree artists, whom he felt were not getting enough exposure.

“It’s worked quite well,” he says, noting the prohibitive cost of opening a gallery in the city. “There is good wall space in [the apartment], and the domestic environment helps new collectors understand how to live with art. You don’t get the intimidation factor of a gallery, and everything remains affordable.”

While building an audience for the artists, Leibov reconnected with his contact from the Judd Foundation in 2009. The deputy director hired the previous year didn’t work out, and Leibov was invited to interview again. This time, he got the job and kept it for two years, making valuable contacts and continuing to build his gallery, which he named BoxoOFFICE — derived from his habit of signing his correspondence “B xoxo.”

In 2011, Leibov bought a foreclosed house in Joshua Tree. It became his residence and site of BoxoHOUSE, which hosted its first artist residencies earlier this year. BoxoPROJECTS, the umbrella for all of Leibov’s art ventures, has come full circle. Desert residencies happen in the first half of the year, while fall and winter are all about mounting shows for the New York art season, both at his own apartment and in pop-up locations.

Leibov sits on the board of the Joshua Tree Chamber of Commerce and has become conversant in environmental and socioeconomic issues affecting the region. His four-week residency emphasizes community engagement. The selection process prioritizes “artists exploring issues of site, community, and the environment.” Residents are encouraged to hold an open house and learn as much as they can about key issues such as sustainability, water management, and the looming threat of development.

“Joshua Tree can regenerate itself through art,” Leibov says. “Property collapse and the encroachment of casinos and big-box stores are things that can ruin the special character of a place like this. If we can generate critical mass through homegrown artistic production, we can keep those negative forces at bay.”

Four artists came for residencies at BoxoHOUSE from January to June of this year. China Adams’ residency had a distinctly environmental overtone, as she took a two-pronged approach to building on her existing practice of recontextualizing discarded materials. By day, she hiked around Joshua Tree, filming pieces of refuse blowing in the wind and highlighting their aesthetic qualities. By night, she worked with Leibov and the community to investigate the material properties of human energy and the possibility of someday presenting it as art.

Saul Melman found another striking way to interact with the desert environment: He turned BoxoHOUSE’s garage into a giant camera obscura that recorded its surroundings, as well as the traces of work done by previous residents. Leibov describes the resulting images as having “a wonderful gestural quality evocative of charcoal drawings.”

Leibov chooses the residents for BoxoHOUSE, but says, “The nature of the residency kind of makes it self-selecting. People who apply will tend to be more interested in a challenging journey. That said, I am definitely looking for artists with a seriousness of direction and a desire to engage. The community here is so rich that if an artist is committed, he or she will get great work out of the experience.”

Out of the Box

This past fall, BoxoPROJECTS expanded its reach through a group show that spanned two locations in New York. The Meek Shall Inherit the Earth, co-curated by Bernard Leibov and artist Elizabeth Keithline, took place at BoxoOFFICE and featured an international roster of artists. At the same time, Keithline’s solo project, The Strong Shall Survive, was exhibited at the Governor’s Island Art Fair. The two exhibitions stimulated a dialog on the impact of human development on the lives of animals.