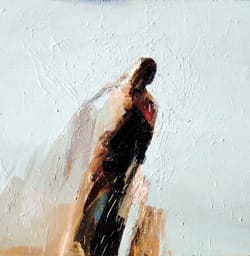 Change extends beyond the spate of presidential politics. This has been a transformational year for art galleries, especially on El Paseo in Palm Desert, where several dealers have been moving into bigger venues and sharpening their exhibition schedules in a fashion bespeaking the resilient strength of fine art amid economic uncertainty.

A walk down El Paseo reveals much about the optimism and progressive nature of art dealers in Palm Desert. Beginning on the west end, at Highway 74, Imago Galleries — a 17-year stalwart specializing in cutting-edge contemporary California and American painters and sculptors — will mount a schedule of exhibitions that includes Bruce Cohen, Joe Goode, Howard Ben Tré, and John Alexander, whose paintings and drawings were the subject of a retrospective exhibition last winter at the Smithsonian American Art Museum. Last year, Imago owners David and Leisa Austin opened Studio, a space off El Paseo at 73413 Hwy. 111 they dedicate to studio glass art. This season, Studio will likely draw as many tourists as it does art collectors with its exhibition of works by Dale Chihuly.

Also on the west end of El Paseo, on the north side of the road, Melissa Morgan Fine Art took over (and gutted) the former Paseo Palms Bar & Grill, affording the gallery twice the space it had in its former location — room to expand its program into cutting-edge Latin American art in all media, as well as abstract expressionism, photography, sculpture, video, and installation works. Look for Dennis Oppenheim, Carlos Betancourt, Deborah Oropallo, and a retrospective of works by Pat Lasch. Earlier this year, MMFA gained critical acclaim for its exhibition of second-generation Light and Space/Finish Fetish artists, including Andy Moses, who will be included in a group show of California abstract artists.

The talk of the town is Heather James Art & Antiquities, which shares the block with MMFA and is best known for its African, Asian, and pre-Columbian antiquities. In a hint of what would soon follow, the gallery last season exhibited works by Andy Warhol and Jianyon Zeng. This season, Heather James has a second and much larger space off El Paseo at the corner of Highway 111 and Portola Avenue in the former Buschlen Mowatt Galleries building. Heather James opens with works by Warhol and Jean-Michel Basquiat, piggybacking on the Palm Springs Art Museum exhibition of Keith Haring paintings from the world-renowned Rubell Family Collection of Miami. Later in the season, the gallery will show important Chinese artists, including Zhang Huan, as well as cutting-edge works by Timothy Tompkins and Peter Gerakaris. The original Heather James Art & Antiquities space on El Paseo will emphasize antiquities.

Continuing east, on the south side of El Paseo, structural additions to The Hart Gallery and Coda Gallery proved successful, enabling the former to introduce many European artists to its exhibition schedule and the latter to create room for its deep roster of U.S. artists, including Laddie John Dill, who gets a solo show in March 2009.

Adagio Galleries, a staple on Palm Canyon Drive in Palm Springs since 1980, has moved its program of Southwest and Latin American art to El Paseo. With a roster that includes R.C. Gorman, Miguel Martinez, B.C. Nowlin, and John Nieto, Adagio fills a niche on the map of El Paseo galleries. It will be in good company with J. Willott Gallery, also entrenched in the classic Southwest genre. Almost every week from January to April, the “two Joshes” — J. Willott owners and childhood friends Joshua Otten and Joshua Paquette — welcome a different artist to paint or sculpt in the gallery and mingle with guests.

Farther east, Edenhurst Gallery — which enjoys a national reputation for its early California and American Impressionism paintings — has moved across the street into a larger space formerly occupied by Eleonore Austerer Gallery. Exhibiting a Who’s Who of early California artists — including Guy Rose, William Wendt, E. Charlton Fortune, Edgar Payne, William Ritschel, and Charles Rollo Peters — Edenhurst Gallery is a veritable museum. (Austerer has semi-retired, but maintains appointment-only hours and shows works on paper by Modern masters in a small space near Coda Gallery and The Hart Gallery.)

Back at the Palm Springs Art Museum, the season opens with an exhibition of works by the California-based social realist painter Enrique Chagoya, followed by Pop art from the Rubell collection, an exhibition of photographic portraits by Robert Mapplethorpe, and a 70-year retrospective of paintings by Wayne Thiebaud.