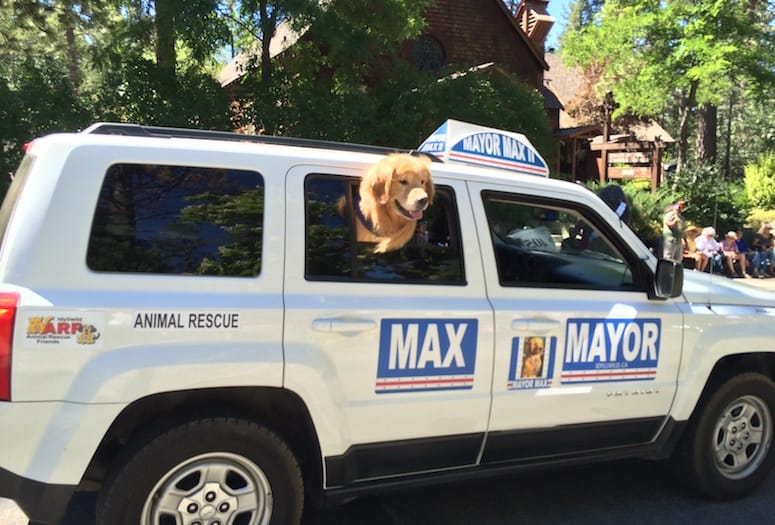 On any given day in the center of Idyllwild, you can find Mayor Max and his deputies, Mikey and Mitzy, greeting visitors from the back of their pickup truck with a lighted taxicab style sign in red, white, and blue.

The canine trio will be the feature attraction at the 31st annual Rotary Club Fourth of July parade that winds through this unincorporated town located a cool 45 minutes above Greater Palm Springs. It’s a Norman Rockwell painting set to life. A juicy slice of Americana where everyone lines the streets of Idyllwild with their chairs, snacks, and cameras and watches 120-plus entries pass by.

“Even though children are tempted to rush up and greet the mayor and the deputies, the parade moves along pretty quickly,” says Phyllis Mueller, who owns the three along with her husband, Glenn Warren. “Everyone is welcome to stop by after the parade to greet Mayor Max and the deputies, who will be under some shade in the center of town.”

Since 2012 when the Animal Rescue Friends of Idyllwild hosted a mayor’s fundraiser in which residents were invited to vote for their favorite dog or cat at one dollar each, $31,000 was raised and 11 year old Mayor Max won by two-thirds of the vote. Mayor Max was reelected to a second term, but died soon after. A new Mayor Max replaced the beloved one, along with Deputy Mayors Mikey and Mitzy, and the trio are lovingly referred to as “The Mayor and the spares!”

Mayor Max has since earned the title of “Mayor for Life,” and continues his ardent duties of welcoming visitors to Idyllwild, comforting the sick and poor, and attending Idyllwild events, such as the Lemon Lily Festival, the Fourth of July Parade, and the Tree Lighting Ceremony at Christmas. There is even an official Mayor Max website in which people can keep track of his schedule of appearances (www.mayormax.com).

“There are other mayors that are dogs across the country,” says Mueller. “But none are as active as Mayor Max and the deputies.”

The festivities don’t end with the parade in Idyllwild. For the first time, a laser light show will dazzle the night skys starting at 9 p.m. on Tahquitz Peak (aka Lily Rock) thanks to longtime residents Chic Fojtik and Gary Kuscher. “It won’t be one continuous beam, but will be balancing light all over the rocks in different places,” says Fojtik, noting the show ll last 20 to 30 minutes.

Fojtik says the laser light show idea started 13 years ago when he and his wife, Pamela, moved to Idyllwild on July 3. “We were told there were no fireworks allowed because we live in a national forest,” recalls Fojtik. “But after we saw a laser light show on the pyramids in Egypt, then we knew it would be possible on Lily Rock.”

Unfortunately, Pamela died last December but Fojtik remained committed to the laser light show and to host it in her honor. He teamed up with Kushner, an art gallery owner who was working on the same idea independently.

“We considered getting sponsors or setting up a crowdfunding page, but we ran out of time” says Kuscher. “We’re going to start small and see how it goes and then maybe get sponsors next year.”

The duo have contracted with Laserium Daystar, a Los Angeles-based production company. ”There was no way to test the laser light show during the day, but they believe it’s going to work,” Fojtik  says. Kuscher and Fojtik have talked with the company about setting the show to music and include images like the national flag and one of Pamela.

Fojtik is not sure where he’s going to be watching the show. More than likely, he will direct traffic to keep people away from where the production company is set up (a location he wouldn’t divulge). “Everyone is so curious! But there’s really not much to see,” says Fojtik. “The production company is operating out of a van with an extension cord plugged into a nearby house.”