The Cities of the Coachella Valley 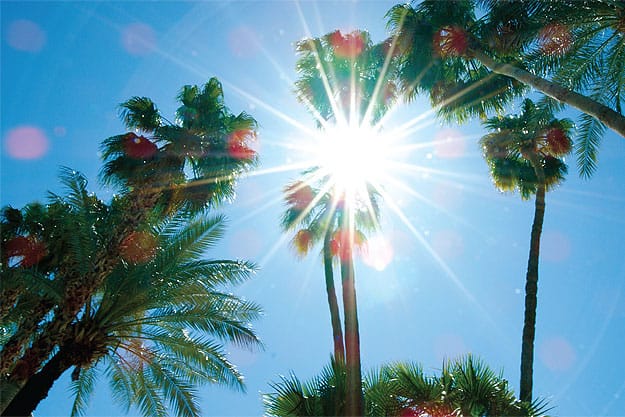 “It’s the magic air … like nowhere else on the planet — sensual, warm, healing, calming. A true remedy for long life and health.” — Suzanne Somers

The ancestral home of the Cahuilla Indians, Palm Springs pulses with the presence of its original inhabitants. Whether visiting downtown’s Spa Resort Casino, “taking the waters” of the resort’s spa, or hiking in the lush Indian Canyons, an aura of spirituality permeates the land. The city itself is probably best known as a hideaway for celebrities who flocked here during the 20th century.

Over the years, Palm Springs grew into a destination with a global reputation for first-class resorts and hotels, modern architecture, great restaurants, eclectic shopping, and year-round fun. Top events include Palm Springs International Film Festival in January, Modernism Week in February, and VillageFest every Thursday night on Palm Canyon Drive. Complete your visit with a ride on Palm Springs Aerial Tramway to enjoy the refreshing beauty of the San Jacinto Mountains.

For those who live to shop, retailers of every stripe comprise the Uptown Design District on North Palm Canyon and along the downtown strip. The restaurant scene continues to grow, with excellent dining at venues such as Trio, Lulu California Bistro, Cheeky’s, and Zini Café Med joining long-standing establishments such as Le Vallauris and LG’s Steakhouse.

As one of the first and arguably the most famous desert resort destinations in the United States, Palm Springs has a celebrity vibe that’s hard to beat.

• Marvel at The Fabulous Palm Springs Follies, a talented cast of “mature” singers and dancers (minimum age 55) performing at the historic Plaza Theatre. After (or before) visit the 26-foot sculpture of Marilyn Monroe located catty-corner from the theater.

1920s — Hollywood celebrities discover Palm Springs as the perfect place to play in the sun.

Boomer’s recreation complex, featuring miniature golf, go-karts, bumper boats, a rock wall, and a game room, brings out the kid in everyone. Cool folks love Desert Ice Castle, a fullservice skating facility. Or you can play in the Fountain of Life in the city’s Town Square or mountain bike along the Santa Rosa Mountains to the south of the city.

• Cathedral City was named after a canyon that reminded an explorer of a European cathedral.

• Noted as among the top 10 retirement bargain spots by US News & World Report.

• Cathedral City has an expanding art-in-public-places program, with sculptures adorning a variety of locations. Rancho Mirage is among the most affluent and well-managed communities in the desert, with 80 percent of homes located in gated enclaves. The city also boasts an enviable roster of celebrities, families, and vacationers. Many flock to Restaurant Row and The River at Rancho Mirage to shop, drink, dine, and go to the movies. Gamers seek out Agua Caliente Casino • Resort • Spa for 24-hour entertainment. For more cerebral undertakings, the architecturally significant Rancho Mirage Public Library offers special events, lectures, and exhibits. Rancho Mirage focuses on health, with distinguished facilities like Eisenhower Medical Center and Betty Ford Center. One of the biggest bonus additions is The Annenberg Retreat at Sunnylands, the spectacular Walter and Leonore Annenberg estate, center, and gardens, which is open for tours, conferences, and special events.

• Study up on the city’s adopted animal: the bighorn sheep.

• Be moved by exhibitions at The Tolerance Education Center.

• Take in one of the desert’s most spectacular views from the 18th hole of the Westin Mission Hills Resort and Spa’s Pete Dyedesigned golf course.

1963 — The Walter and Leonore Annenberg estate, with interior décor by silent film star William Haines, opens its doors and becomes known for being one of the most coveted invites in the country.

1973 — Unincorporated areas known as the “Cove Communities” merge as the City of Rancho Mirage incorporates.

1982 — The Betty Ford Center, specializing in the treatment of drug and alcohol dependency, opens.

2008 — The 16-story Agua Caliente Casino • Resort • Spa opens with great expectations — and lives up to them. Palm Desert is considered the geographical center of oasis communities. With stunning mountain views, 350 days of sunshine a year, and an environment that encourages an active lifestyle, the city attracts a wide variety of people. Consumers enjoy considerable shopping options, including elegant El Paseo and its wealth of fine stores, such as Saks Fifth Avenue, Apple, Louis Vuitton, Kate Spade, Lucky Brand Jeans, and the recent addition of Bang & Olufsen. Nearby Westfield Palm Desert represents the only regional mall in the area.

Palm Desert is also education focused, with three college campuses: College of the Desert; California State University, San Bernardino; and University of California, Riverside. The city’s must-see attraction is The Living Desert Zoo & Botanical Garden, a wildlife park devoted to desert flora and fauna from around the world — and the proud exhibitor of a collection of model trains that will delight the whole family. Add to this the arts and culture offerings of McCallum Theatre and Palm Desert’s continued popularity among locals and visitors is easily understood.

• Views from Palm Desert range from Mount San Jacinto to the west and past the Salton Sea to the southeast of the city. For a romantic moment from sunrise to sunset, check out Vista Point up the corkscrew road known as Highway 74.

1973 — The City of Palm Desert incorporates.

1976-79 — Construction of a flood channels allows for the building of residential homes and the Palm Desert Town Center, currently Westfield Palm Desert.

2005 — The debut of Fashion Week El Paseo ushers in a new tradition on the West Coast fashion calendar. • When President Dwight Eisenhower first vacationed here in 1954, he was so impressed with Indian Wells that it became his winter residence.

• The upscale golf shop in the IW Club boasts one of only nine Callaway Golf Performance Centers in the country.

• Although The Living Desert Zoo & Botanical Garden’s street address is in Palm Desert, the park spans both cities.

• BNP Paribas Open is the fifth largest tennis tournament in the world. • Merv Griffin’s estate sits on 40 acres and is available for party and event rentals.

• La Quinta has 14 parks, including the Lake Cahuilla Recreation Area, which features fishing, camping, picnicking, more than 25 golf courses (SilverRock Resort is the only public facility), and miles and miles of trails.

• La Quinta’s commitment to public art is evidenced by the many installations throughout the city. In Old Town La Quinta, fi nd Art Under the Umbrellas once a month during season. As the largest and one of the fastestgrowing cities in the Coachella Valley and the second county seat for Riverside County, Indio is a force in the area. The increasing popularity of the Coachella Valley Music and Arts Festival and Stagecoach Music Festival, both held at Empire Polo Club, have contributed to much of the city’s current girth. But the “City of Festivals” does not stop there. Millions of people come here annually for a host of additional events, including the Riverside County Fair and National Date Festival, Southwest Arts Festival, and International Tamale Festival. Other favorite attractions include Fantasy Springs Resort Casino, Coachella Valley History Museum, Coachella Valley Wild Bird Center, and the Cabazon Cultural Museum. The Indio Chamber of Commerce offers self-guided tours through Indio’s murals, a series of 12 outdoor panels commissioned to honor the city’s history and people.

• Night golfing is available at the Indio Municipal Golf Course — the only place in the valley offering after-dark play.

• Indio is home to award-winning teen and senior centers.

• “Indio” is Spanish for Indian.

• A not-to-be-missed short film, The Romance and Sex Life of the Date, screens continuously every day at Shields Date Garden.

1930 — Indio is the fi rst city in the Coachella Valley to incorporate.

1999 — The first Coachella Valley Music and Arts Festival is held. Coachella marks the desert’s easternmost city, where 80 percent of the land remains undeveloped and the median age of residents is 24. Coachella is one of the fastest-growing cities in the state with a population that is 98 percent Hispanic. The area’s casinos on Indian reservations — Spotlight 29 Casino, and Augustine Casino — bring the majority of visitors to Coachella, but it’s said that the authentic Mexican food brings them back.

• Great Mexican restaurants in the city include La Cazuela, Jalisco’s, and Las Flores.

• Together with neighboring cities Indio, Thermal, and Mecca, Coachella produces 95 percent of the nation’s dates.

1876 — The city is founded as Woodspur, when the Southern Pacific Railroad builds a rail siding.

1901 — The citizens vote to rename their 2.5-square-mile community Coachella.

1946 — The City of Coachella incorporates.

2001 — A significant annexation of property takes place, which increases the city’s area to 32 square miles. Healing hot mineral waters are discovered in 1913 at the foot of the San Bernardino Mountains. Almost 100 years later, “California’s Spa City” attracts visitors globally. Water naturally heated underground to as much as 180 degrees has resulted in more than two dozen spas and spa hotels, including the celebrity-studded Two Bunch Palms Resort & Spa, soothing Miracle Springs Resort, and DogSpa and Wellness Center, for traveling with your pup.

• Pioneer Cabot Yerxa worked on his residence, now Cabot’s Pueblo Museum, until his death in 1965. Today, daily tours are offered of the hand-crafted home.

• The San Andreas Fault separates Desert Hot Springs (which is on the North American Plate) from other area cities, which are on the Pacific Plate.

• Two Bunch Palms Resort & Spa was featured in the 1992 movie The Player.