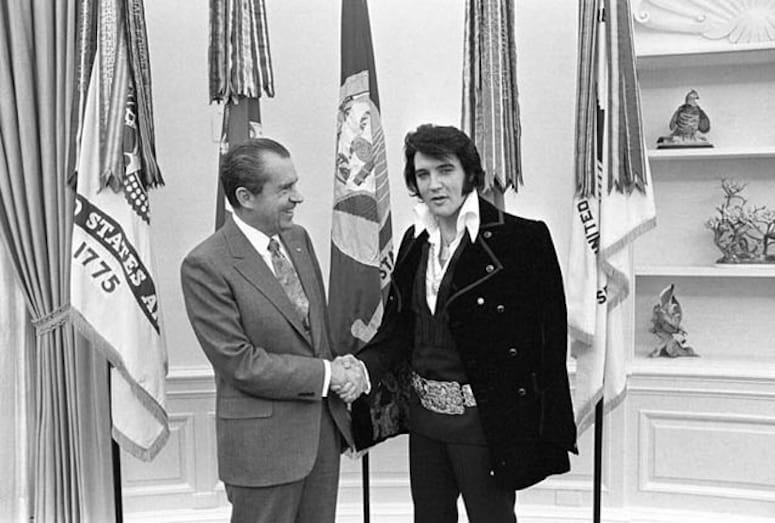 On Dec. 21, 1970, Elvis Presley wrote a short letter to President Richard Nixon during a flight to Washington, D.C. He wrote the letter on American Airlines stationary and personally delivered it to a security guard at the northwest gate of the White House.

In the letter, Presley expressed his desire to meet with President Nixon. Presley explained that he had met Vice President Spiro Agnew in Palm Springs three weeks earlier and expressed his concerns to the vice president that drug use and the hippie culture were destroying the country.

Presley indicated his desire to obtain credentials of a federal agent to join the fight against illegal drug use. His letter included multiple room numbers at the Hotel Washington and the alias he was registered under.

He also included his personal phone numbers at his homes in Palm Springs, Beverly Hills and Memphis, and the phone numbers in all of the same cities of his manager, Colonel Tom Parker.

After a brief discussion with Presley, President Nixon&rsquo;s aide, Eglin Krogh, was convinced of the rock &#39;n&#39; roll icon&#39;s sincerity and of his potential value in the fight against drug use by young people.&nbsp;Krogh asked Elvis to return to his hotel to wait for a phone call.

According to transcripts from the Nixon Presidential Library, the meeting was approved and it is reported that the &ldquo;King&rdquo; told the President that he was on his side in the war on drugs. He asked the president for a badge from the Bureau of Narcotics and Dangerous Drugs.

&ldquo;Can we get him a badge?&rdquo; President Nixon asked Krogh.

Krogh said he could, and President Nixon ordered it done.

One of the more intriguing methods is by exploring the city&rsquo;s history.