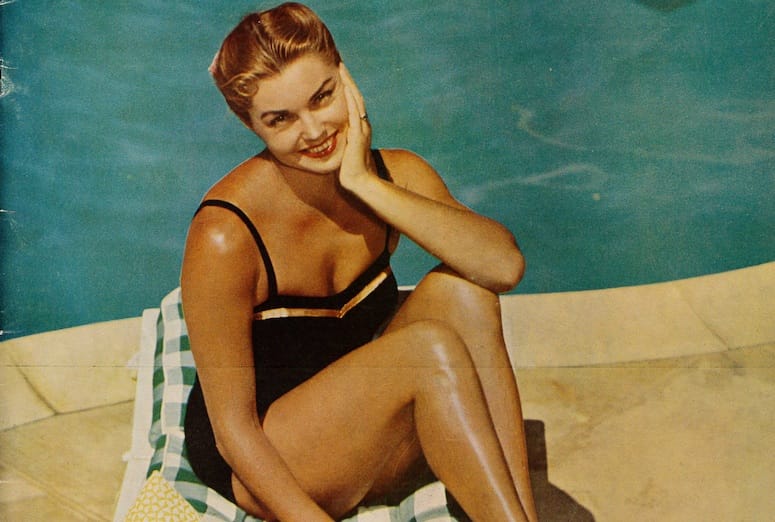 In 1955, a locally published magazine, the Palm Springs Villager, showcased the quintessential pool cover girl of the era on the front of its September issue, Southern California’s own Esther Williams.

Contained within the magazine is a spread highlighting the film star’s Palm Springs exploits, including trips to the Chi Chi and, of course, a glamorous poolside photo shoot.

Williams dons a black swimsuit made for her line in partnership with Cole of California as she playfully poses on her “Esther Williams SunSpray”. The poolside furniture is part chaise lounge, part sprinkler that cools the sunbather with a continuous shower of water via the attached garden hose.

No stranger to Palm Springs, Williams’ first notable visit was in 1940 while starring with Johnny Weissmuller (remember Tarzan?) in the San Francisco Aquacade. The duo performed at the 13th annual El Mirador Hotel Swimming and Diving meet.

Made honorary mayor of Twentynine Palms in 1948, Williams frequently visited the desert staying at the El Mirador Hotel and soaking up the sun by its glistening pool.

She and then husband, Ben Gage, were also charter members of the Thunderbird Country Club, and could often be seen with residents Hoagy Carmichael, Desi Arnaz, and the like carousing at the clubhouse.