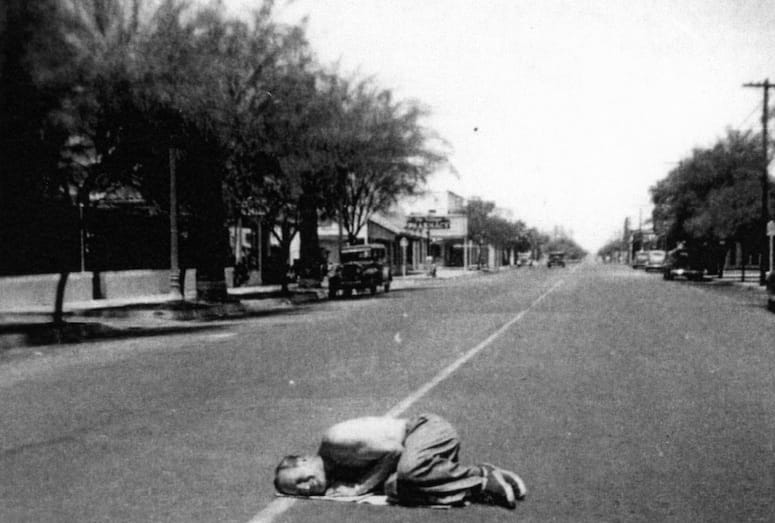 After meeting Palm Springs pioneer Earle Strebe in Lake Arrowhead at a food counter, Jack Freeman was asked to come to Palm Springs in 1933 to run Harry Brott’s food counter at the Village Pharmacy.

Freeman made $25 a week in Palm Springs working 12 hours a day, Monday through Sunday. While working at the Village Pharmacy, Freeman met many of the celebrities of the day who would come in to grab a bite.

Freeman recounted in an oral history done with the Palm Springs Historical Society in 2004 that John Wayne came in after working on his first movie. Others Freeman mentioned included Rod Taylor, Rudy Vallee, William Powell, Alice Faye, Phil Harris, and Paul and Daisy Lukas, who according to Freeman, taught him to fly a bi-plane.

In 1934, on a particularly slow summer day working at the pharmacy food counter, Freeman assumed the fetal position in the middle of Palm Canyon Drive, demonstrating the lack of traffic on the main thoroughfare.

Freeman left Palm Springs briefly to serve in the Army Air Corps during World War II. He later partnered with Irwin Schuman to open Freeman’s Desert Grill, which went on to become the Chi Chi.

Schuman later took over the restaurant and Freeman went into the meat and provisions business opening Desert Provision Co., a business he would run for many decades.

Freeman was a founding member of Temple Isaiah, Tamarisk Country Club, and the Palm Springs Chamber of Commerce. In 2005, he died in Palm Springs at age 94.