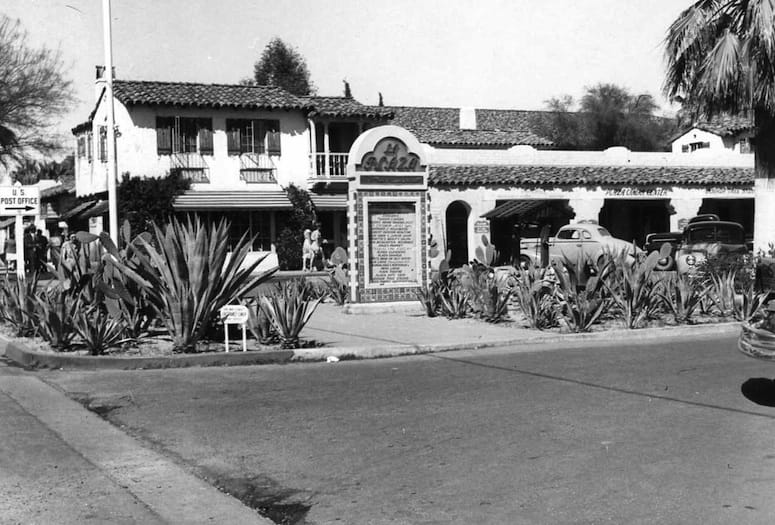 Still a thriving shopping center, the Plaza breathes life into Palm Springs' downtown just as it has done for more than 70 years.

Home to some of the most popular restaurants and shops in the city, it is a destination for both visitors and locals alike.

Opened in 1936, Palm Springs Plaza, as it was originally known (it is also referred to as "La Plaza" or "The Plaza"), was an instant Palm Springs landmark. Described as "a large group of buildings, harmonic in scale, buoyant of color, crisp of design," the Plaza was the brainchild of Julia Carnell.

Funding the project with $1 million of her own money, she raised a few eyebrows when construction began. Palm Springs' own matron hotelier, Nellie Coffman, is quoted as saying, "I don't understand Mrs. Carnell putting so much money into something so far out of town." Palm Springs Plaza was ahead of its time. E. Stewart Williams, son of Plaza architect, Harry Williams, and himself a well-known Palm Springs architect, said of the Plaza, "It was the first coordinated thing with retail and all the amenities that the whole town would need. The Plaza was the first, I would say, comprehensive little shopping center in Southern California in the 1930s."

In fact, it was the biggest resort development in the United States since the Depression: 38 shops, 21 studio apartments, eight penthouses, a theatre, a 150-car garage (remarkably, built underneath the Plaza), servants' living quarters, gasoline station, and an individual parkway.

In September of 1936, the Palm Springs News ran a story announcing the upcoming completion of the Plaza construction.

“A veritable army of workmen have labored since last January to have the picturesque Palm Springs Plaza, one of the most notable building undertakings in local history, ready for the opening of this season.” Also mentioned was the theatre being built on the property, “One of the first important structures to be completed at the Palm Springs Plaza will be the romantically designed theatre. It is to be ready for installation of equipment about October 15.”

Upon the completion of construction, Harry Williams wrote in an article for Palm Springs Parade magazine, "It would have been simple to double the floor space of Palm Springs Plaza. It might have been built much taller. But height and congestion both would be out of place in the wide, horizontal sweep of the California Desert." Part of the Plaza was a large theatre owned and operated by Earle Strebe. On Dec. 12, 1936, the Plaza Theatre celebrated its opening night with the world premier of the MGM film, Camille, directed by George Cukor and starring Greta Garbo, Robert Taylor (pictured at left), and Lionel Barrymore.

None other than Louella Parsons broadcast the star-studded event live. Strebe claimed that Garbo herself attended the premier, but went incognito and sat unnoticed in the back of the theatre.

The Plaza Theatre is now vacant after serving as the home to the Fabulous Palm Springs Follies for nearly 30 years.