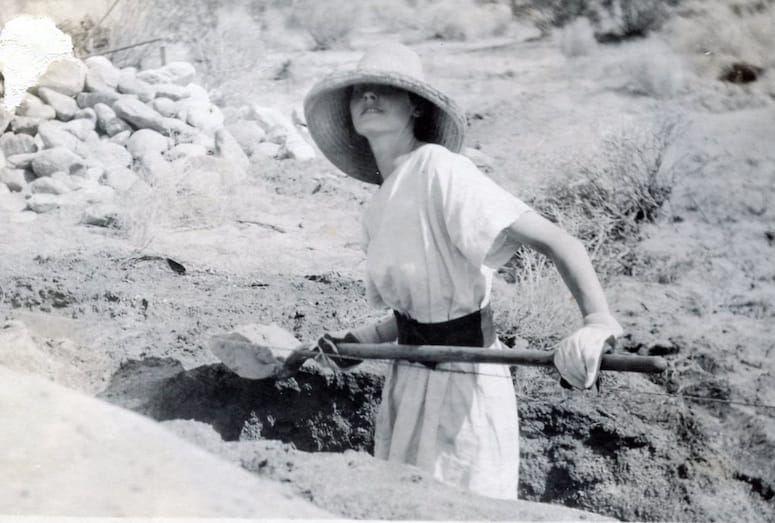 At a time when a handful of strong women ran Palm Springs, a beautiful, eccentric, Chicago socialite named Lois Kellogg arrived at the Desert Inn for a “visit” and decided she had found herself a home.

Kellogg was born in 1894 to a wealthy family living on Chicago’s famed Millionaire Row. Her parent’s wedding was reported by the Chicago Tribune to have been “one of the most brilliant weddings of the season.”

The couple divorced in 1899 and she took her mother’s maiden name. When her maternal grandmother, heiress to the Charles P. Kellogg & Co. manufacturing fortune died and disinherited Lois’s mother, she challenged the will that attracted extensive press coverage and gossip among Chicago’s elite.

She hired architect Harold “Bill” Cody to design her home and Alvah Hicks to build it. During construction, she worked alongside the workmen hanging shingles on the roofs of the three buildings in her compound.

In the main building, tiled hand-carved Moorish doors led to a vast entrance hall, which had highly polished hardwood floors leading to many guest rooms. The windows were fitted with copper screens that could be replaced with glass in the winter. The compound included a 65-foot pool with a Persian garden. Rudolf Valentino and his wife, Natcha Rombova, were houseguests while filming the silent movie, The Sheik, in 1921.

She became friends with local pioneers Harriet Cody, Zaddie Bunker and the White sisters, and roamed the canyons with them on horseback. On one of those trips, she roped a wild black stallion that she kept but never rode. She also owned prize-winning white short-horned bulls, which were considered to be dangerous animals.

In a trip with Harriet Cody to Belgium in 1923, she purchased a Russian wolfhound from the kennels of Grand Duke Nicholas Romanov that would be declared winner in the fashionable Palm Springs Dog Show in 1934 at the Desert Inn.

Harold Cody died in 1924, and construction on "Fools Folly" stopped. Kellogg lived for a few more years in her unfinished home until development ruined her view and encroached on her solitude.

She took her black stallion, white short-horned bulls and at least 20 Russian wolfhounds to a ranch in Pahrump, Nev. In 1944, according to her death certificate, she died from a tularemia (also known as Pahvant Valley plague, rabbit fever, deer fly fever, and Ohara's fever) after being bitten by one of her dogs.