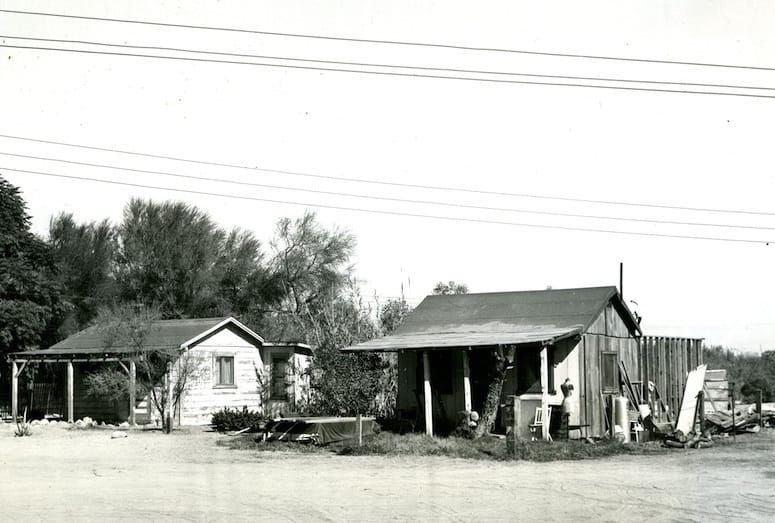 In an article written by Phil Stone and published in the Palm Springs Villager Magazine in December of 1956, a three-part plan to improve communication between the City Council and the Agua Caliente Band of Cahuilla Indians Tribal Council was implemented.

First an invitation was extended to the executive committee of the Agua Caliente Band of Cahuilla Indians to meet with City representatives once every month. The second part of the plan was that Mayor Florian Boyd would appoint Vyola Olinger and Gloria Gillette to the Mayor’s Off-Street Parking Committee.

Lastly, a joint meeting between the City Council, the Tribal Council, and the regional director of the Federal Home and Housing Finance Agency would be scheduled to outline federal aid that might be available for a long-range slum clearance plan on Section 14, which belongs to Tribal members.

Section 14 extends from Indian Canyon east to Sunrise Way and from Ramon Road north to Alejo Road. A challenge arose when Section 14 land that borders downtown Palm Springs was leased to build homes.

Many of the homes were built prior to when the City had building or electrical codes or at least before those codes were enforced on tribal land. With the passing of years, some of these homes particularly on the south end of Section 14 had degenerated into “sub-standard shanties.”

Both the City Council and the Tribal Council agreed the degeneration of the neighborhood had become a menace to the City’s health and an obstacle to the Agua Caliente Band of Cahuilla Indians hope of orderly and profitable commercial development.