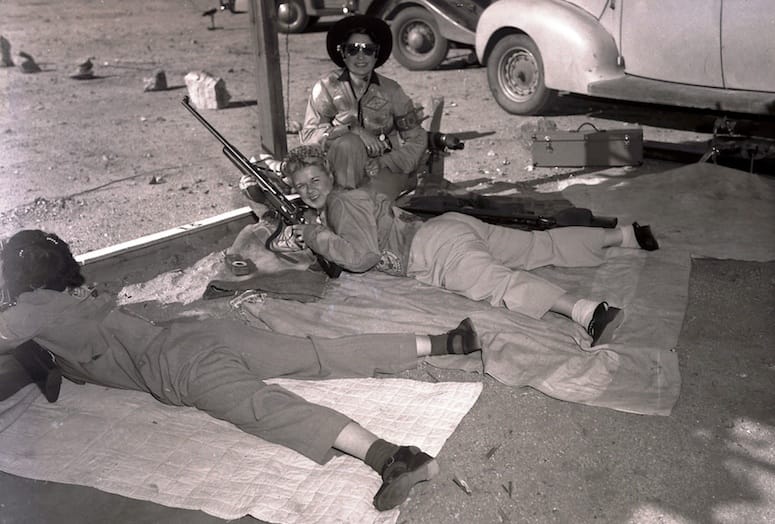 Sportsman’s Headquarters, owned and operated by Harry Mann, had a rifle range located on North Palm Canyon Drive beginning in the 1930s.

The Palm Springs Gun Club was one of the frequent visitors (pictured above). Harry and his wife, Ruby, had a respected collection of historic firearms at their shooting range which, as reported by the Palm Springs News in 1938, even caught the “assiduous attention of Errol Flynn.”

Harry Mann was known to venture out on hunting trips in the ‘30s and ‘40s using his 1870 buffalo rifle to kill elk and other game animals. Ruby Mann held the highest score in 1941 at a local Rifle Club turkey shoot where the prizes were Oregon pheasants and guinea fowl.

On a 1940 trip to Montana, Harry Mann killed an elk on a steep hillside.

As reported in a 1940 newspaper article: “After cutting the elk up, Harry started down the hill dragging two of the quarters with him. Suddenly one of the huge hunks, wrapped in canvas, bounced forward, pulling him along. So steep was the hillside that the weight and unbalancing caused Harry to take about three somersaults. He landed in a pit, all tangled up in the ropes. In fact, had a guide not cut him loose, he might have had a rather tough time of it. But Mann was none the worse, except for a few bruises and scratches.”