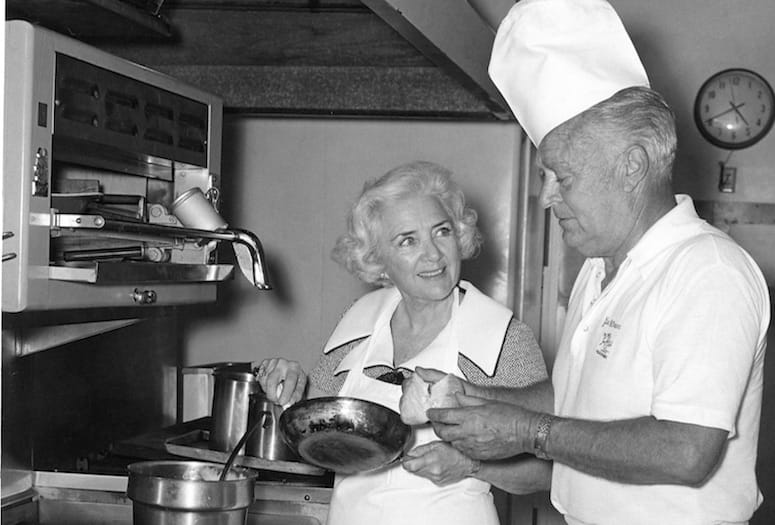 Susan Fleming Marx and Charlie Farrell in the kitchen of the Racquet Club in 1965.
PHOTOGRAPH COURTESY PALM SPRINGS HISTORICAL SOCIETY

In March of 1961, Susan Marx, former Ziegfeld girl, actress and wife of comedian Harpo Marx, was elected to serve a President of the Palm Springs High School PTA, beginning her career as an activist and local politician.

Changes began immediately when she instituted a streamlined format for membership meetings by abandoning the business portion for full membership meetings. Such simplifications along with her celebrity status helped boost membership in the organization by a whopping 400 percent.

Marx spearheaded various pet projects during her tenure that ranged from incidental to insightful. One of her projects provided white dinner jackets and party dresses to those who could not afford them for only a small cleaning fee. She also established no-interest loans (with money raised form the many events held by the organization) to students who found themselves strapped for cash. She explained that the “cushion fund” would keep students from dropping out of school to ease unexpected family financial emergencies.

Following her outstanding work as PTA president, Marx was elected to serve on the boards of both the Palm Springs Unified School District and College of the Desert. After Harpo’s death in 1964, she became even more involved in community politics – as a planning commissioner for the city of Rancho Mirage and then by running (though losing) a campaign for the California State Assembly.

There is a multitude of ways to Explore Palm Springs, which turns 81 in 2019.

One of the more intriguing methods is by exploring Palm Springs history.
The Palm Springs Historical Society will share a story whose time and place often corresponds with today.