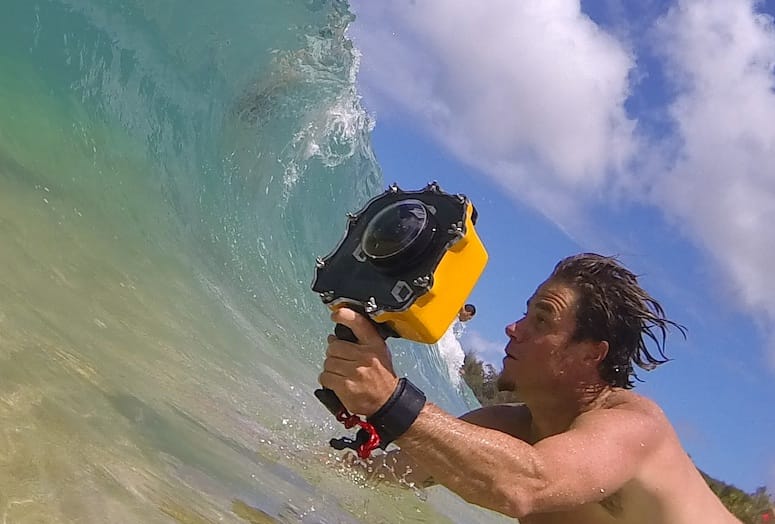 Philip Waller has surfed 50-foot waves and jumped out of airplanes.

But he admits that the first time he swam with predatory Tiger sharks, he was nervous.

“In free diving, there is no sound,” Waller says. “To be in the water with animals of that size it’s hard not to hear the ‘Jaws’ music living inside my head. But then you see the sunbeams touch the water and you are with these animals and fear goes away."

“I’m very lucky,” Waller adds. “If you understand what fear is…it can be good and push you. But if you are in a panic state, then bad things can happen. Overcoming fear builds character.”

Waller has brought this human aspect to the plight of sharks and their importance to the earth’s eco-system by directing the film, “Extinction Soup”, which will screen at the American Documentary Film Fest, March 27-31, in Palm Springs.

After struggling with a fading Hollywood career at a very young age, Waller dealt with drug and alcohol addiction. His attitude changed when a friend, Jimmy Hall, inspired him to embrace life and the environment.

Hall and his girlfriend, Stefanie Bendl (pictured at left) managed Shark Encounters tours off the coast of Hawaii. Upon Hall’s unexpected death, Waller teamed with Bendl to understand Hall’s passion for the environment and honor the legacy to the animals he adored.

“People are annihilating sharks out of fear, but really sharks should fear humans,” Waller says.

Research indicates that about 100 million sharks are killed each year by humans — roughly 11,000 sharks every hour — animal.discovery.com/fish/shark-fishing.htm

During this process, he exposed his own failures that allowed him to create a film that people connected to.

“Sharks are not cute, cuddly animals,” he says. “In order to make people care about sharks, you have to make people understand why we care. It’s hard for me to see my faults on film, but I’m like everyone else. We all have highs and lows, it’s how you pick yourself up.”

Sink Your Teeth Into This

Swimming With Sharks
In the course of making this film, Waller found how much politics, the fishing industry and even cultural traditions have played into the systematic killing of sharks for the fin trade.

Shark fin soup is considered a delicacy in many cultures, and Waller and Bendl’s documentary sheds light on the move to change human behavior to recognize that killing an important species is wrong. The film chronicles the movement to change laws to stop the sale, possession and distribution of shark fins.

Waller plans to direct and produce more films on the environment, but he has also been intrigued by the political process that led to the historic decision by the Hawaiian Islands to approve a law banning shark fining.