Mark Nichols, the man behind the Palm Springs interior design firm that bears his name. 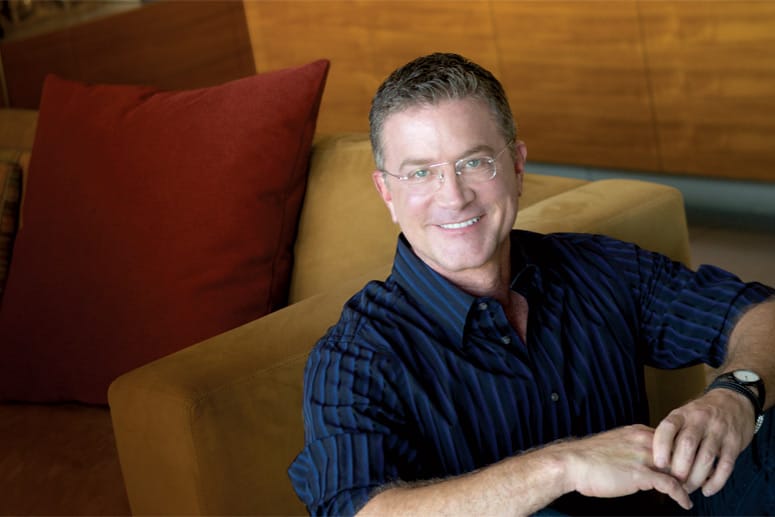 “My affinity for design began with Legos,” says Mark Nichols, the man behind the Palm Springs interior design firm that bears his name. “I don’t think I stopped playing with them until I was 19.”

Nichols’ fascination with puzzles remains the stimulator of his work — managing scale and proportion, creating a comfortable yet aesthetically pleasing atmosphere — and doing it in a way that is environmentally responsible and cost-efficient and that makes sense for the homeowners’ lifestyles.

“A common challenge I face is to design a space that is sophisticated enough for parents but is also kid-friendly,” Nichols says.

Since his firm’s inception in 2005, Nichols’ sustainable structures have earned him a LEED Gold certification, a spot on HGTV’s America’s Top 10 Designers for an Alexander he worked on in the Las Palmas neighborhood (“They appreciated my use of white. … I used 19 shades of white paint in that house!”), and most recently, the 2013 ASID Design Award for best construction on a home less than 3,500 square feet.

“Designing for small spaces is the most intellectually challenging thing,” says the Georgia native, who also lived in Manhattan before relocating to Palm Springs in 2000. “New York City gives you an appreciation for living in such tiny spaces.” For this reason, Nichols says he most enjoys applying his work to bathrooms. (“Mine would have a steam shower with a bench, a vanity with adequate storage, natural light, and surfaces that create a tranquil, serene environment.”)

But the environmental element is what inspires the designer above all else: “I want to create spaces that are contemporary but warm and connect aesthetically to the surrounding landscape. The most important thing in Palm Springs is to respect the site on which the architecture exists. I like my work to pay homage to its surroundings. I get so much inspiration from what’s outside these windows.”

Eco-friendly materials in earthy colors complement this blur between a structure and its environment — sustainable woods like oak and walnut (“Bamboo is a passing trend,” Nichols says); cellulose wallpaper saturated with vegetable dyes in greens, rusts, browns, and muted blues that mimic nature; and warm, ambient LED lighting used in places where an abundance of natural light isn’t possible.

Focusing on air quality throughout a home, Nichols employs only those materials that are free of formaldehyde, which off-gasses into the atmosphere. This includes countertops, cabinetry, stains, and sealants. Creative use of such materials as medium density fiberboard (MDF) — found on the inside of cabinets — can eliminate a veneer altogether.

Running a hand across a mustard-yellow MDF wall, which resembles the shape of a Lego, Nichols says, “Raw material, in this instance, can be used as a surface if you think about it creatively.”

Creative application of light and shade are two other important elements of designing the ideal desert home. The third is a really good sofa. “If you don’t have a good sofa,” Nichols says, “then what’s the point?”