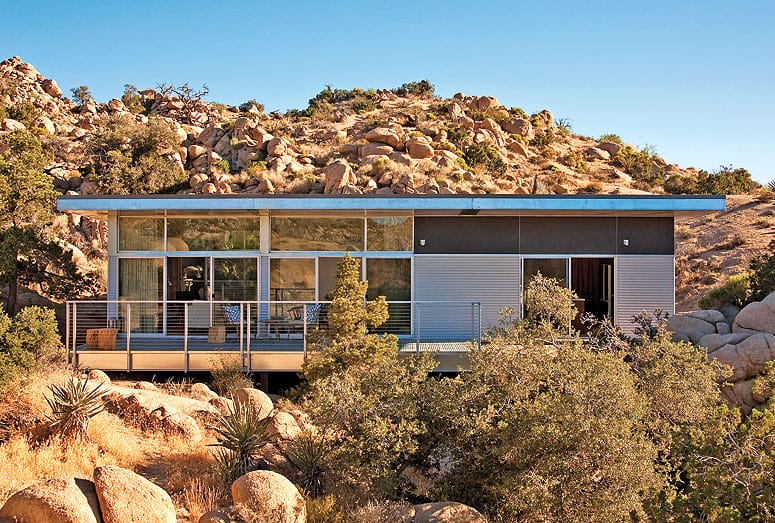 After the drive from Los Angeles, Vince Gerardis is transformed the moment he arrives at his 1,125-square-foot home in Yucca Valley. “I love arriving at night,” he says. “I turn off the car and step out and there’s … silence. It’s a complete silence, with stars everywhere, and all of a sudden I’m in a whole new world.”

But what a treat waking up must be, too, when “home” is a structure that has been thoughtfully placed in the landscape — floated above it, in fact, barely disturbing the natural habitat. The miracle of this build is the result of a fruitful collaboration between David McAdam of Blue Sky Building Systems and Lance O’Donnell and Martin Brunner at o2 Architecture in Palm Springs. Built in 2011, the structure is nearly a replica of a home they conceived in 2010 when McAdam was struggling to build a home for himself in the same Rock Reach area of Yucca Valley, a sparsely populated private community near Joshua Tree National Park.

“I liked the idea of only lightly touching the land,” McAdam says of the inspiration for his first project, an idea that traditional builders laughed at. “I wanted to float a house over the landscape.” In response, McAdam did his own research, eventually coming upon industrial mezzanines in lightweight steel that he brought to O’Donnell. The architect had prior experience in steel structures, having worked in the office of Donald Wexler, whose groundbreaking Steel Development Houses in early 1960s Palm Springs used the industrial material to build elegantly modern homes that could naturally withstand the harsh desert climate.

“I was born and raised in the desert,” O’Donnell says. “I have a visceral understanding of this climate. It deeply influences the way I think and approach things.” The architect’s personal and professional affinities proved a fitting combination with McAdam’s enthusiasm and engineers in creating not only his own house but also a building system, a type of customized prefab housing.

The system is based on something called a bidirectional moment frame. In engineering terms, a “moment” equals movement, such as the effects of wind or earthquake. In creating a bidirectional frame, the structure is stabilized in two directions, a particularly critical attribute in an area underscored by the San Andreas Fault. A second advantage of the system is the elimination of the need for any load-bearing walls. As a result, windows, doors, and even interior walls can be placed anywhere, and the house has a wide-open vista and direct connection to nature.

And, like the best prefab architecture, it’s also a resource-savvy system that can be manufactured off-site, shipped flat, and then assembled. In the case of Gerardis’ home, it’s bolted onto footings that float the house above the desert floor and the natural ravine it straddles, setting the structure close to the earth without harming it. The free flow of air beneath the house also means the free flow of water when rain, or occasionally snow, falls. Leaving the terrain and natural watershed untouched allows runoff to go where it has always gone and virtually eliminates the threat of erosion.

In addition to lending themselves to a clean, contemporary architectural style, today’s prefab homes also carry environmental advantages. On average, 20 to 40 percent of building materials delivered to a traditional construction site are hauled out as waste. By building the components in a factory setting, there is less waste generated and less energy consumed. Ditto with delivery. In the desert, the ecological advantages are visible. By eliminating the need to bulldoze a flat pad for construction, the character of the natural landscape, including slow-growing desert flora, is preserved. “When the house is finished, there is no scarred earth,” says McAdam. “It looks like it was dropped on the site from above.”

The 10-acre site that occupies the two-bedroom, one-bath Rock Reach residence was chosen for its sense of privacy, a comfort — and luxury — that plays out in the space at any time of day or night. Eschewing the panoramic, the team, led this time by o2’s Martin Brunner, chose a spot with a “near view,” immersing the house directly in nature. Fluid rock formations, mature flora, and the expansive desert sky are all on mesmerizing display. Practicality was also taken into consideration: Heat management is critical at 4,000 feet altitude, where temperatures can easily fluctuate by 30 degrees in a day.

Accordingly, the house is oriented for optimal passive solar function with the main living area positioned due south. An 8-foot-deep overhang shields the space and its deck from summer’s direct sun but welcomes its warming light during the winter months when it arcs low in the sky.

Utilizing natural systems is in sync with the property’s other sustainable features, including an array of solar panels installed on top of the carport. Low-flow and low-flush water mechanisms are throughout the house, water is heated on demand, low-VOC finishes coat walls, and renewable cork flooring flows through every room. And steel, the core component of the structure, is the “most recycled material on earth,” says McAdam.

“It’s not easy to find this level of taste in such a beautiful location anywhere, let alone the high desert,” says Gerardis. But then again, desert design and modernism are nearly interchangeable here. Framed and clad in highly durable steel and nearly rimmed in glass, the home’s volumes and views merge indoor and outdoor living. And with the home’s pared-back interior, the scenery can take center stage.

Gerardis, who is actually the home’s second owner, bought the house furnished, embracing the midcentury ethos already in place. Mixing vintage and modern versions of iconic designs by Harry Bertoia, Eero Saarinen, and George Nelson, the open-plan living area is a continuous comfort zone. The wood-clad walls are in fact room dividers that also house closets and cabinets, adding a streamlined air while maximizing the compact floor plan.

It’s a peaceful, low-maintenance space, well suited to Gerardis’ come-and-go habits. The busy entertainment executive (Gerardis was producer of HBO’s Game of Thrones’ first season), who keeps another home in Santa Monica, has yet to spend more than a week at a time there since purchasing the home last summer. But it remains an incomparable retreat. Rising early to write, even he was surprised to look up from his computer to see a fire-orange sky as the sun rose in the desert: “It truly is the most luxurious writing getaway.”

Body and soul are the clear human beneficiaries of this elegant perch. “There’s a transformation that happens from the city to the desert,” Gerardis says. “It’s a realignment of everything. The air is soft here whether it’s hot or cold, even with a wind. You can smell the piñon, juniper, and sage. I hike almost every day.”

Even without setting a foot outside, the nature of place is paramount in this prefab desert construct. “The physical health and psychological health that modern architecture embraces is based on the indoor-outdoor experience,” O’Donnell says. “Greater well-being comes from being connected to the environment.” Floating above it is not so bad either.