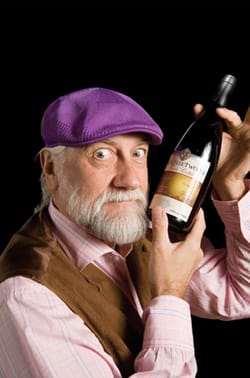 Entice guests to your next party by telling them a celebrity will be there. Then, instead of trying to wheedle your way past an actor/athlete/musician’s gatekeeper, run to your local wine merchant and grab a Fess Parker, Arnold Palmer, or Mick Fleetwood bottling. Oh, and don’t forget, there’s always Elvis and Marilyn.

The names and faces of celebrities — even dead ones — grace the labels of numerous varietals. Ego trip or marketing ploy? Some-times, but many celebrity wines represent  serious ventures.

With his band’s music playing in the background, the founder of Fleetwood Mac signed two- and six-packs of his wines at Costco stores in Palm Desert and La Quinta in December and made it clear the wines reflect his personal palate.

“This is all about assembling a picture for my taste, and my taste happens to be really mellow,” he says. “When people come to us, they will know that my sensibilities are very nontannic. Some wines attack you; these are easy to drink.”

Fleetwood chose an unusual tack as a winemaker. Instead of establishing a vineyard (à la The Smothers Brothers) or aligning himself with one (à la Arnold Palmer with Luna Vineyards), he diversified his options for the types of wine he could make by working with several vineyards, including Lucas & Lewellen, Casa Cassara, Firestone in Santa Barbara County, and Duck Pond in Washington’s Columbia Valley. His current line includes seven varietals.

Fleetwood admits to being a wine convert. “Twenty years ago, I would have said, ‘Hogwash! Give me the beer. Give me the brandy.’” Now he’s stretching even further.

“I would have shied away from a Riesling,” he says, calling his most recent varietal “a work in progress.”

He further admits that he’s not tilling the fields, but neither do most winemakers. “I’m very involved,” he says. “I’m making sure [the wine] is really how I imagined it should be.”

Of course, his musical sensibilities also come into play. “Every one of these wines is like putting together a song,” he says. “The blending experience is like mixing music. The only difference is music has an endless life. Wine doesn’t.”

As he signs bottles, Fleetwood chats amiably and leisurely with customers. Surely he doesn’t need to sit for four hours at a time in 36 Costco stores to sell his wines, but there he is.

“Whatever I do, I give my pledge to get in the trenches and make sure I do my part,” he says. “That’s just my nature.

“All it relies on is the hope in the end that people will enjoy my choices. If people didn’t like it, I would just be drinking this at home.

Fleetwood Goes His Own Way
Mick Fleetwood follows the beat of his own drum — musically and when making wine.