Family Influence Brings Out the Soul of Mexico 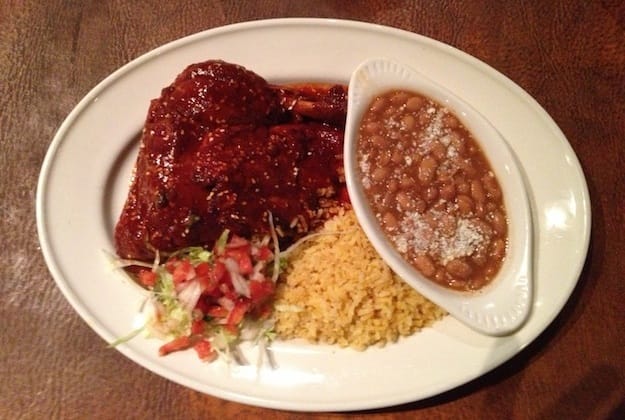 The state of Michoácan, Mexico is often referred to as the Soul of Mexico.

At it’s namesake restaurant in Indio, brothers Francisco, Eddie, Juan, and Jose Lua bring plenty of that soul to their family-run business.

And that charming woman who just came by to ask how your food is and maybe reveal a recipe secret or two? That’s their mom, Teresa, who worked for years as a chef at the Esmeralda Resort in Indian Wells.

But it was always Teresa’s dream to have her own place, so all of her children pitched in some of their savings and Soul of Mexico opened in 2007.

The restaurant’s extensive menu is filled with family recipes, traditional Mexican fare, and a few surprises. The chicken Mole Doña Elisa, for example, eschews the usual poblano sauce for a sweet and spicy chile one.

“This is the way my grandmother used to make it, so it’s a tribute to her,” says Francisco.

After my friend polished off every bite of his chicken, Teresa quietly whispered to him that the secret to the dish’s sweetness was rice vinegar.

Francisco tells me that his personal favorite is the Chile Relleno en Abogada. “It’s stuffed with shrimp and has an Alfredo-type sauce. The recipe is from Oaxaca and was invented by a nun.”

He adds that, “We also have a number of very popular dishes such as Enchiladas Suizas and Enchiladas a la Veracruz. In addition, we make them the way we did growing up in Mexico—Enchiladas Michoácan, which are filled with mashed potatoes.”

I was a big fan of the Trio Enchiladas—chicken, cheese, and beef enchiladas that are topped with, respectively, a green, white, and red sauce. If that reminds you of the colors on the flag of Mexico, it’s no mistake.

“You get three flavors, that are totally different, all at the same time,” says Francisco. “And if you find you like one sauce more than another, you can substitute them the next time you order the dish.”

Fajita fans won’t be disappointed either. Soul of Mexico makes them sizzle with white wine and a bit of achiote, which adds an earthy flavor.

And be sure and save room for dessert. You’ll have your choice of flan, churros, fried ice cream, or buñelos. If you’ve really got a sugar craving, ask for Paco’s Dessert even though it’s not listed on the menu.

“I have a big sweet tooth,” says Francisco, whose nickname is Paco, “and Jose was always teasing me when I’d eat multiple desserts. So one day he took a big glass, the kind that’s used for a giant margarita for two or three people, and filled it with all of our desserts—except the flan—and Paco’s Dessert was born.”

Now that’s what I call a good brother.