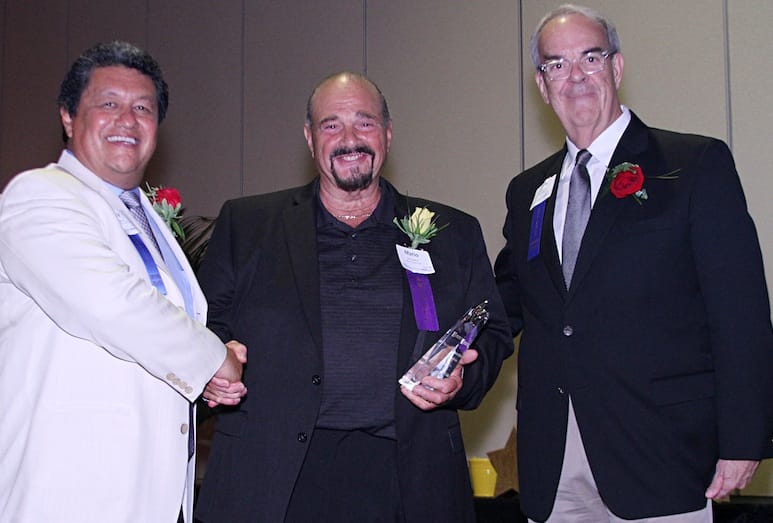 As he stood recently to accept the Business Person of the Year award at the Palm Desert Area Chamber of Commerce’s 60th annual awards dinner at JW Marriott Desert Springs, Mario Del Guidice motioned for a special group to stand with him.

“I just stopped and had all my family – there were about 20 of them — stand up and said, ‘They empower me!'” Del Guidice says. “At 72 years old, they inspire me to go forward all the time.”

He can be found every morning at the Bermuda Dunes restaurant making fresh sauces, sausages, and pastas. Del Guidice is there from about 7 a.m. to noon, then goes around to each of the other six restaurants for about an hour each day.

“My sons keep me alive by working me to death!” he jokes. “It’s my great pride to see my children and grandchildren learn the business.” Del Giudice’s recent accolade from the chamber was based on more than just business acumen; it’s also inclusive of a person’s community involvement and support of the chamber of commerce. Other top recipients were Carl Karcher of Carl’s Jr. nationwide hamburger chain as Citizen of the Year, and an award of excellence to City of Palm Desert Director of Special Programs, Frankie Riddle.

“You can always find Mario helping out the handicapped kids along with helping out kids from different walks of life – giving them a second chance,” says Barbara deBoom, president and CEO of the Palm Desert Area Chamber. “He is often asked to speak at school functions and his message is always the same: ‘Do the job to the best of your ability, but remember to enjoy the work that you do’.”

Del Guidice says he was honored to be part of such elite company.

“I’m just an everyday working guy,” Del Guidice says. “But I realized I was also honored for being involved with a lot of different entities – Desert Arc, Relay for Life, Make a Wish, and so on.  We have always instilled a family feeling at Mario’s restaurants. Working with my family is my strength.”

Del Guidice got his start in the family business in Brooklyn and Queens, New York, in 1961. After a family visit to Palm Springs, he moved them here in 1972, and 41 years later, has built an empire of neighborhood Italian cafes around the valley.
While the menus and pricing are the same at each restaurant, Del Guidice has decorated each with a different aspect of his beloved ancestral home.

“The Sun City restaurant has the Sistine Chapel painted on the dome ceiling,” says Del Guidice. “It’s something to see customers looking up and admiring the painting. The Bermuda Dunes store has pictures of Portofino. And in the Palm Desert restaurant, we have the whole Venice all around the private dining room. Everywhere you look, it’s like you’re in the middle of Venice.”

What separates Mario’s are the pastas – fettuccini, penne, spaghetti, linguine, and angel hair – and add the sauce and toppings of your choice, including Bolognese, al pesto, Alfredo, creamy marinara, carbonara, and meatballs.

Soups, salads, sandwiches, veal and chicken entrees, side dishes, and lunch and dinner specials are part of the Mario’s family restaurant experience.