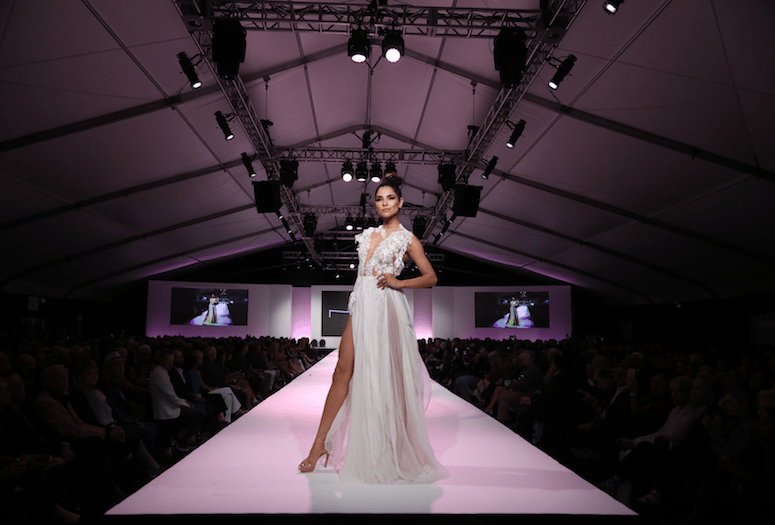 Once a year, the style elite come together to celebrate a week of fashion and creativity with that signature desert flair that makes this area so special. This year was no different, save for the fact that I had the good fortune to experience Fashion Week El Paseo firsthand.

I consider myself a Fashion Week veteran, having braved countless years of New York Fashion Week humidity, hurricanes, and haute couture. So to be honest, I wasn’t expecting to be blown away by the grandeur or production level of the Palm Desert event.

Opening night set the tone for the week with sparkling lights and confectionary colors contrasting against the already surreal backdrop of the mountainscape. Interactive displays of sartorial and artistic expression were dotted around the tent. The crowd, throughout the eight bustling days at The Gardens on El Paseo, was dressed to the nines — although that phrase had its own set of unique interpretations.

VIDEO: View the highlights of Fashion Week El Paseo 2018 through the lens of Tienlyn Jacobson.

I couldn’t help but note the difference between this style set and the NYFW crowd, with the major difference being a lack of hegemony at Fashion Week El Paseo. There was more color, more casual, and surprisingly, way more over-the-top in general.

The quality of the shows was equally impressive with favorites including Michael Costello and his fellow former Project Runway competitors, Trina Turk, and Alice & Olivia. I also found myself getting a little emotional during Saks Fifth Avenue’s presentation of industry veteran Carolina Herrera’s pre-fall and fall collections. These were the final two collections shown by the label with the Herrera at the helm. As a young girl just getting interested in fashion, I held Herrera high on a pedestal. So it was a little bittersweet to witness these last ensembles in person. I found the finale, a parade of her signature look of a classic white button-down and taffeta ball skirt in multiple colors, to be perfectly fitting.

Another highlight of the week included a conversation with Ali Rahimi from Ali Rahimi Mon Atelier about his active choice in using older models in his show. His philosophy, which I could never word as eloquently as he, was that it took a woman with experience to be able to wear his clothes properly. And reflecting upon his show on opening night, his models did carry themselves with a unique sense of confident grace not always seen on the runway.

Mark your calendars for the 2019 iteration of Fashion Week El Paseo, March 25–31. If tradition serves as a marker, next year promises to deliver an equally sensational experience.