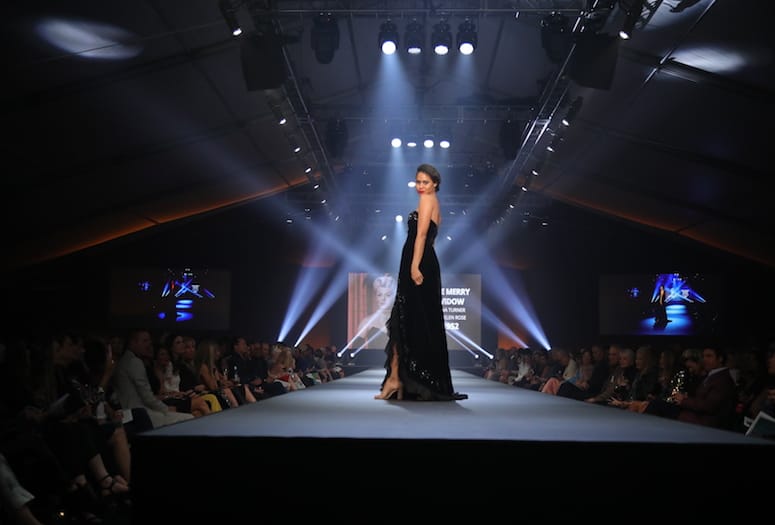 The silver screen shone with golden moments on day five of Fashion Week El Paseo as old Hollywood met new. Vintage dresses from Oscar-winning costume designer Helen Rose, awoken from their archival slumber at Palm Springs Historical Society, re-emerged for one more rousing curtain call and proved as timeless and ageless as the legendary stars who once wore them.

In true Tinseltown fashion, the “Hollywood Party: Nobody Sleeps Tonight” pre-show cocktail party was lively from the start, with decked-out guests dancing in the (full) moonlight to a DJ while champagne flowed. The Reception Tent displayed mannequins adorned in Helen Rose gowns from socialite Nelda Linsk’s personal collection while partygoers sipped drinks and snapped shots of one another against oversize backdrops of Palm Springs Life fashion spreads.

As the clock ticked toward 8 p.m., guests made their way to the runway — lit to look like a red carpet — as “Hollywood Party,” the theme from the 1934 movie of the same name, played over the sound system.

Rose, whose 23-year career included 200 films, 10 Academy Award nominations, and two wins, lived in the desert until her death in 1985. She gave her costume archives to friends Marilyn Visel and Barbara Marx, who in turn donated them to the Palm Springs Historical Society in 2011 to form the Helen Rose/Marilyn Visel collection. (The creations are carefully wrapped and stored in a climate-controlled room.)

On the runway, the evening’s first model appeared in an iconic lace dress, ornate hat, and parasol worn by Audrey Hepburn and designed by Cecil Beaton; the music segued into “On the Street Where You Live” as the movie poster for 1964’s My Fair Lady displayed in the background. (Each piece was backdropped with the movie’s poster, year, and stars while musical selections played from each film.)

The show offered more than 20 pieces, from the metallic sheath and diaphanous chiffon that floated over Cyd Charisse’s graceful gams in 1957’s Silk Stockings to the sexy corselet that hugged Lana Turner’s every curve in 1952’s The Merry Widow. (A flapper dress by Gilbert Adrian from 1929’s Broadway Melody and Marlene Dietrich’s sleek black velvet gown and throw from 1935’s The Devil Is a Woman by Travis Banton also made cameo appearances.) 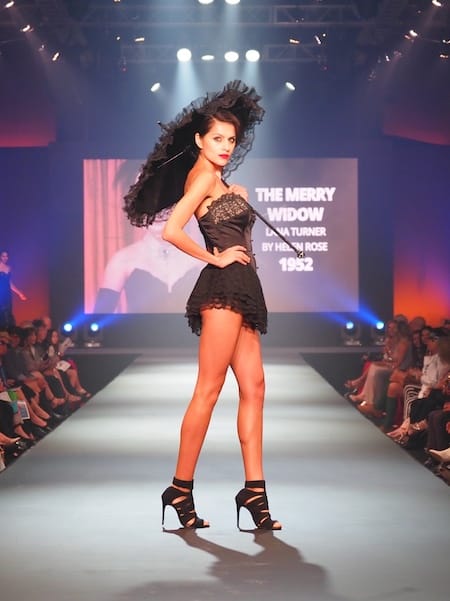 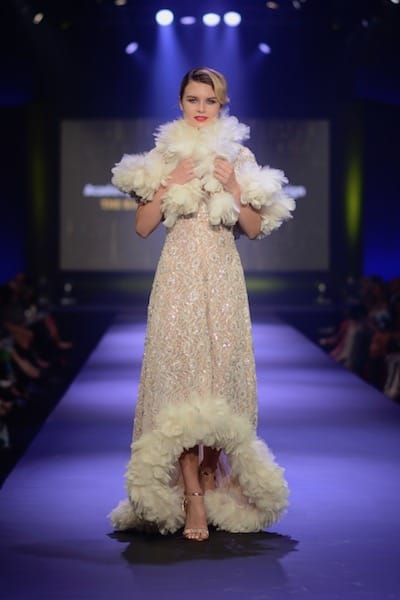 A Helen Rise Oscar winner from The Bad and the Beautiful. 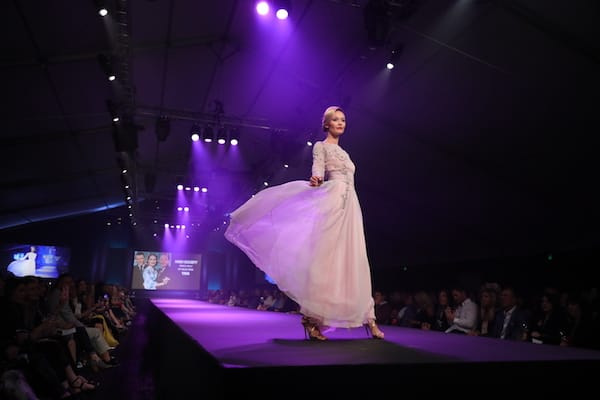 A Helen Rose outfit from the film, High Society.

As Lady Gaga’s “Shallow” played, Cadile began with a sheer navy organza micro mini, followed by a sleek black pant with a strapless beaded bodice and train. This led into a navy column dress with a V-back and a black-on-nude beaded micro mini with ostrich detailing and an art deco vibe — a look later echoed in a longer sheath dress. 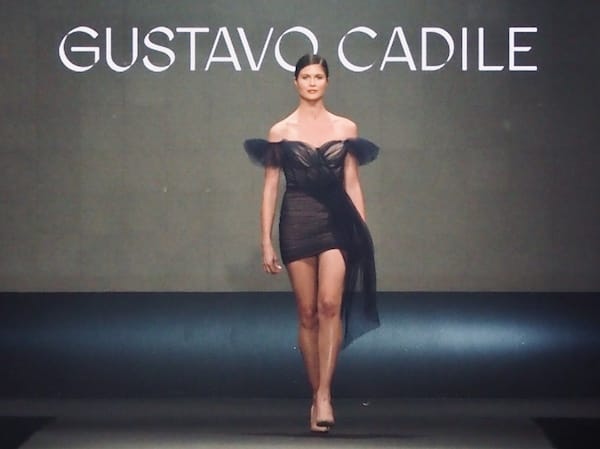 Gustavo Cadile's collection made a seamless transition on the runway. 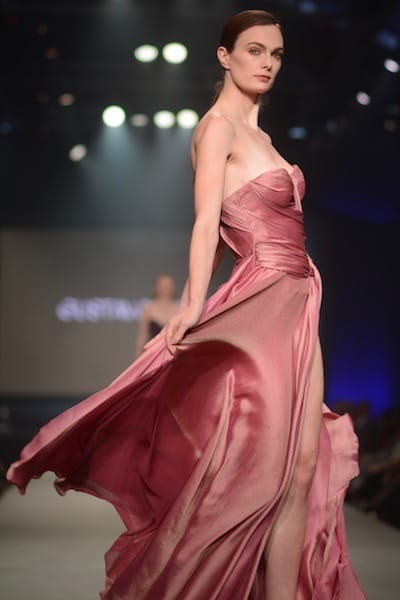 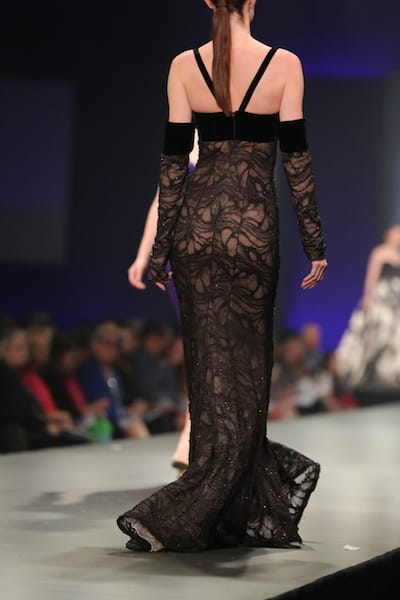 Florals with wide skirts juxtaposed with shimmering gold numbers and sexy, see-through-to-the waist dresses. A stunning sheer white gown with a fitted bodice served as the final pièce de résistance, eliciting enthusiastic applause and standing ovations for Cadile as he took to the runway at the show’s end. 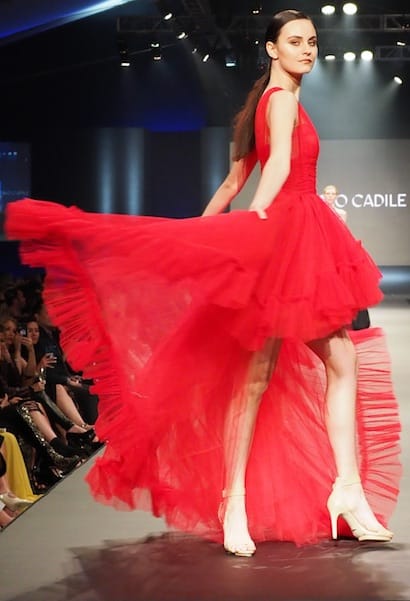 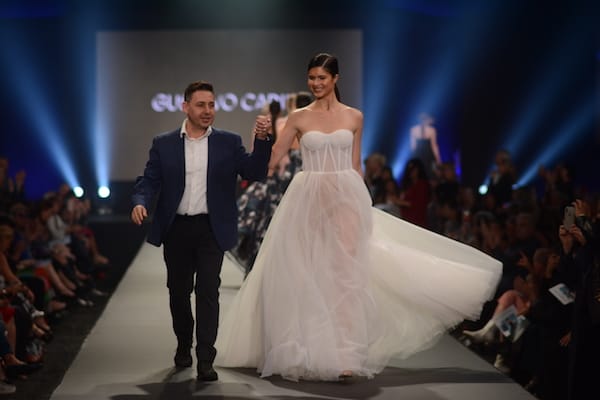 Fashion Week El Paseo continues today in the reception tent with a trunk show featuring Cadile follows in the same location from 11 a.m. to 2 p.m. Admission is free.

On the runway, FIDM/Fashion Institute of Design and Merchandising’s Debut Presentation offers a glimpse at rising young talents as they present their first couture collections. Cocktail reception begins at 6:30 p.m., followed by the fashion show at 8 p.m.