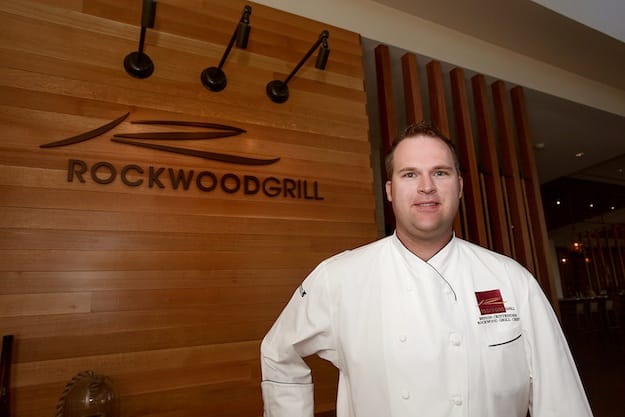 When chef Bryson Crittenden says he takes a farm-to-table approach to his cooking, he’s not kidding.

At Rockwood Grill, an all-day dining spot in the JW Marriott Desert Springs Resort & Spa in Palm Desert, locally sourced ingredients are definitely the stars of the show — but that doesn’t mean they are piled one on top of another.

“I think we try to be a little more contemporary and a little more focused on the simple rather than the complicated,” said Crittenden, who graduated from the Culinary Institute of America in Hyde Park, NY in 2006.

“Having 14 different flowers on a plate is not what Rockwood is about,” he continued. “It’s not about taking all the great products we use and manipulating them into a ‘Rockwood such and such.’ A lot of our dishes don’t have more than five or six ingredients and that’s a reflection of the quality products we procure — we don’t want to mask their natural flavors with a bunch of heavy sauces.”

Something as simple as his bacon-wrapped dates epitomizes this philosophy. Nitrate-free, pecan-smoked bacon surrounds a touch of cream cheese, a Medjool date from the Coachella Valley, and blue cheese from Point Reyes.

“So it’s just four ingredients, but a great harmony of those ingredients,” said Crittenden.

“It’s a very mild goat cheese,” said Crittenden, “and it’s a great combination with the sweetness of the vinaigrette and the beets.”

The dish is one of Crittenden’s favorites and he tells me that’s one of the reasons he wants me to taste it.

“Not everyone is a big beet fan, but after trying this they think about it a little more,” he said.

And speaking as someone who is not a big beet fan, he was right.

“We want to give people the option of making their own dinner, which allows them to focus on what they really want,” said Crittenden.

It’s an idea that jives with Crittenden’s upbringing in Oklahoma.

“We were all about family gatherings and taking care of each other,” he said. “Here at Rockwood, we’re doing the same thing for our guests and giving them the quality they deserve. I really take pride in that and it’s something that stems from that family experience of wanting to take care of people and bring everyone together.”